Kicking Butt and Getting Butt Kicked

Today was an interesting day for me at the Copperopolis Circuit Race.

This event was too far from my house (105 miles or so) but it offered a separate Men's 2 category, which is something I almost never get - I almost always have to race with the Pros and Category 1 riders, and as mentioned previously, I typically get my butt kicked when I do that.

I'm not saying I don't like racing P12 races, I'm just saying that I don't think I am strong enough yet to be a protagonist in those races yet - I'm still just the chorus. I don't think that's surprising either - any of you 4s out there want to race a 234 race? How do you think you'll do? It'll probably hurt...

Contrariwise, oh I love the E2 field by itself. This is racing - I can try breakaways, I can do real tactics, and if it comes down to a sprint I can sprint with these guys. I'll skip to the punchline and say that I got 2nd today, and I'll mention that the guy who beat me also just got enough points that he's upgrading to 1. So I'm basically at the top end of the 2 range in crits at least. Doesn't mean much in P12 races but does make these E2 races fun.

The course was a Zamboni-smooth out-n-back essentially, with rolling hills. The race itself had one prominent strategic feature, that being a 15ish person field, with 4 folks on the same (Sierra Nevada) team, and they were dedicated to making it a field sprint. The other racers kept attacking, but there was always someone willing to chase, and there was always a Sierra Nevada rider marking the break by being in it but not working.

Near the end, I went off on a break attempt with two other folks and a Sierra Nevada rider, but true to form Mr Nevada didn't work. I proceeded to alternate pulling hard and then gapping him off the back of the break to make him work to close the gap. I tried to explain it to my breakmates but it's hard to talk in that situation so they didn't get it and he was basically getting a free ride. That doesn't make for a fast breakaway and sure enough we were pulled back (likely by Hendrik Pohl who apparently only knows one effort level - hard) and we were set up for an all-the-marbles sprint with 2 miles to go.

Sierra Nevada at least lined up a decent lead-out at this point, and I started touching the wind a bit to move on to 5th wheel. This was a downhill tailwind sprint, with a 75m rise at the end of it. I'd timed the sprint the last couple of times through and was set to jump around 225m to go. Unfortunately the Sierra Nevada rider doing the last leadout stint (36mph, nice) moved over when he was done instead of riding straight, sending me towards the cones and making me check up a bit when I should have been pedaling, but more importantly the guy that beat me jumped about 1 second before I did and held it. I rolled it up to 40mph and held my own against him but I never got that gap back.

I'll take 2nd though, my best placing since the Madera Stage Race road stage in the M35+123s. Here's the loot and dorky grin, including that t-shirt - ooo I'm rich 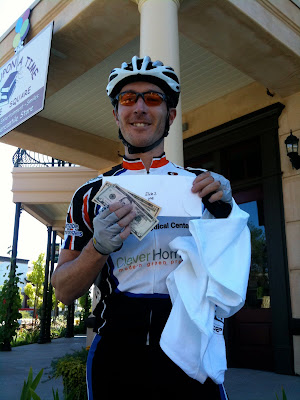 That gives me 3 more cat 1 upgrade points, for a 13 point total (out of 30 needed, in a 12-month window), so I'm still chipping away at the cat 1 upgrade and who knows, I might make it. I might even be ready for it when it happens at this rate!

I hung around for the second race of the day, my loved/hated P12 race, and this one was definitely a learning exercise. I was looking for the workout mostly, and I got that in spades, but what I learned is that a) Rand Miller has some sort of incredible anti-draft vortex immediately behind him, and b) I need to follow someone else's wheel if I'm looking to make it into moves, because Rand's a bit too much for me.

I learned all this in once of those decisive moments where you can either make or break a result - a possible result or no result. We were 10 minutes in, the race had already been pretty active, and after some reshuffling there were a few riders up the road. They were the right mix of teams and it looked set to go, with a 35 second gap already. After a U-turn, Rand accelerated and I thought "this is it - if I'm going to get there, now's the time". We were on a false flat up, into a headwind, and I'll let the annotated data tell the story: 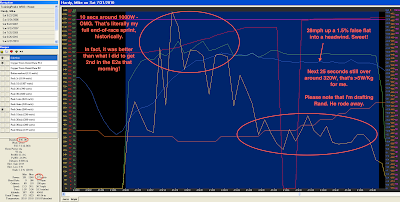 That was a 20W/Kg jump! Then a full sprint, with 60ish minutes left. Damn. I blew up huge on the right side of that graph there - I had to sit up for 10-15 seconds, and after about a half minute when the pack finally came back up to me (yes, it took them twice as long to cover the same distance from the attack, shee-it) I was starting to feel a bit normal again, but ouch.

I'll mention for completeness that Rand made it to the break, then won the race. All I can say is dang.
Posted by Mike Hardy at 7:41 PM 1 comment:

You know what's awesome on a Saturday? Doing a whole pile of crits. Not one or two, three. Make sure it's hot too. That was the plan this Saturday in lovely (no lie) Novato for the NorCal Crits.

There was some crit action in Watsonville as well - with a really deep field, a tough course, and a 1.5 hour drive from my house. All of those things were not on my menu. What I'm looking for is races where I can be active so I can learn some racing-at-the-front tricks while I get stronger, but I'll be the first to admit it - my fitness isn't quite there enough to trade punches with the full Yahoo and CalGiant squads. I can ride with them, but I can't make them hurt. So off to Novato I go.

Nifty thing about this race, it has a 2/3 field. You know what it's like racing P12 fields all the time? Wake up in the morning, make some coffee but don't drink it. Then have someone you like kick you in the nuts for 60 minutes. It's fun though I swear. Just not as fun as racing 2s and 3s without the P1 folks ;-).

I have a silly quest to upgrade to Category 1 (as you can see in the sidebar), though I have no reason to or use for it, and a 2/3 race is a good place to pick up some points, so I was looking to do well in this race. The course reads like a sprinter's fantasy with a downhill headwind (which kills breaks) and no technical corners (which help breaks). So I sat in like the lousy wheel-suck I am. After a bunch of last-couple-of-laps efforts I won't bore you with, I rolled into the last corner 3rd wheel behind Rainier Schaeffer (I think) while Rainier's Godspeed courier teammate was absolutely drilling it with a fantastic leadout. I jumped after the corner thinking the downhill would make the 200m-to-the-line run doable but - no - I hit 40mph then the headwind sapped the speed and 4 dudes came around, 2 by inches. 5th place. Woe is me, but I have to tell you - it was fantastic to be in the sprint for real. It's been a while and it felt great.

Bonus - they pick the 2s separately, and I'm sure there were more than 11 of us, possibly more than 21, so I got at least 1 elite category 1 upgrade point, and maybe 2.

That was the biggest excitement of the day - the last two races were duds for me but I'm planning on doing The Everest Challenge (29,000' of climbing in two days - awesome) so I need some long, hard workouts and I'm doing the next two races to get them.

The M35-123 was a big fast roll-around with nothing much happening, which is great for me because it allows me to do a nearly Oscar-winning wheelsuck performance involving soft-pedaling, refusing to pull, stealthily taking positions when people aren't paying attention and just generally going fast for free whenever possible. I was lining up on lap 3 to hit the sprint again but fixing my 2/3 race error, when I get that squishy feeling in the rear. Shit! Yep. my rear wheel is going flat. Not all at once - a slow leak, but it's definitely low. No free laps inside 5 laps to go, so my race is done - the tire isn't totally flat but sprinting on 40psi isn't safe. I'm a 110psi dude, 40psi is low enough you can roll a tire if you're not careful, I won't do it. I rolled around and got placed so I didn't get a DNF, but I was disappointed. That's racing.

Next up was the P123. 90 minutes of hot fun. 2 Yahoo riders. A bunch of "other" (myself included there). This race was really active - always someone off the front but I wanted to sprint, not ride a breakaway. I worked to stitch it together a couple times but finally a move of 7 got away, the pack gave up, and now the pack's sprinting for 8th. That's still okay by me, I'm looking for the workout. This sprint I lined up half-assed though and wasn't far enough up in the pack in the last half of the first lap. Maybe 10 deep when I should have been 5th, and the inevitable happened there - two people nearly collided, one locked up his brakes, and I had to touch my brakes to avoid them. If you've never been in a sprint at the end of a bike race, know this: to touch your brakes during the sprint is to lose. It's like putting a parachute out - everyone else shoots ahead of you and you're done. This sounds scary but no fear, we're rank amateurs on bikes wearing nearly no protective equipment and going 32 miles per hour - everything's under control. So I just rolled this in at the end - also a little disappointing but I was in it for the workout, so it's okay.

Riiight at the end of the race, I started to get the starts of cramp twinges. Not full twinges, and definitely not cramps yet - I was still able to throw down huge power but the legs are screaming. That's the workout what I'm looking for.

Final stats - just a touch over 100 miles of crit, averaging around 26mph. Nice.

That's it. 1 for 3 on luck, but that first one was a lot of fun, and I got an upgrade point, maybe two. Plus I got to see that even though I'm not quite P1 caliber yet, I'm still pretty quick on a bike - I'm very strong in a 2/3 field. I'll keep training and learning, and see what I can do about the P1 status.

Cheers!
Posted by Mike Hardy at 8:41 PM No comments: