One goal met, but a thorough spanking

I beat the entire BPG team at Pescadero

I know, I know, it's practically cheating as there were only two there
and one of them (the guy from BPG that was in the winning breakaway
move, actually) flatted out.

But I didn't say what qualified, did I? Just that I thought it would be
funny to beat the whole BPG team at a race. This of course conclusively
proves I'm single-handedly better than all of them, of course.

More honestly though, I got my ass handed to me at Pescadero. I blew up
a bit on the main climb each time up the hill but chased back on the
first two times. The third of four times up the small hills I blew off
the back when Paul Mach hit the front to stretch his legs or something
and was unable to chase back on despite a real effort with a couple
other guys.

After that I just rolled it around for the rest of the 103 miles and
finished - not quite last, but really close. Total mileage to the car
for the drive home was 113 miles, and my nifty power meter told me it
was about 3 days worth of training stress in 5 hours. Made for a great
nap when I got back anyway.

What did I learn? I can't climb with the P12 pack yet. I'm a little too
heavy, and not quite strong enough. I'm close...but close isn't quite
good enough. So I need to work on that.

For the power junkies out there the main climb was something around 7:30
each time, which was 310W average for me, and I was 144lbs for the race.

Had I been able to hang with the pack I think it would have been 7:00 to
7:15, and while I was with them I was doing ~380W steady for 2 minutes.
Those are great numbers for me, just not quite good enough.

5lbs (to my racing weight last season, basically) and 5% more power and
I think I'd be there. That's attainable...

Posted by Mike Hardy at 8:54 AM No comments:

I don't understand my body at all

Sometimes I think it's ironic that I'm viewed as someone that's always going by the numbers and is totally scientific. While I do use various numbers a lot in my training and attempt to be as scientific as possible there are two sides to the coin, and just as I am my own exercise scientist, I am also sometimes just Mike the guinea pig athlete.

Sunday and Monday, for instance, were a couple days where it's clear that sometimes no matter how methodical I am, my body knows more than I do and sometimes I just can't explain it.

For a quick bit of context:
- Tuesday was the Port Ride to round out a nearly 100mile day, and it was predictably hard but felt good
- Wednesday was easy (just about an hour toodling along)
- Thursday I felt great, so I went full gas on the short-end - 1minute intervals and sprints. Set a new PR here
- Friday, recovery toodling
- Saturday I go to my Father-in-law's house and move furniture until I'm dead-tired
- Sunday I try to race the 2-wheel crit and DNF a race for only the second time *ever* since racing from 1995

Sunday was awful. Splitting headache, foaming at the mouth, couldn't put power down, pulled myself an hour into a 75-minute crit.

So I figure the furniture-moving was bad. And maybe I was dehydrated, I dunno.

I wake up Monday, I'm pretty sore all over from moving still, but I go for a spin on the trainer anyway, and this happens: 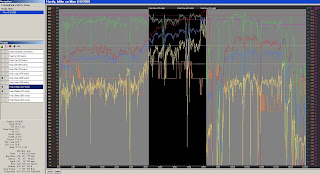 WTF? I mean, basically I had planned to just ride easy and was riding what felt easy when I looked down and realized I'd been zipping along at my previous FTP (270W) for around 5 minutes with no heart rate movement at all, even as I put more load on a few times.

While I'm doing this, I'm thinking it is very, very strange. Like, maybe my heart has a problem and I need a doctor strange.

So I figure I'll round it out for a 20-minute FTP test and with 10 minutes to go I ratchet it up pretty big - to 320W. A couple months ago I could do that for 4 minutes and I'd pretty much hurl at 4:01, so trying it for 10 minutes is unrealistic at best. Now my heart finally edged up to threshold levels, and even then only after bumping up to 330W a couple times.

I still felt low perceived exertion though, so with two minutes left I figured I'd go for 380W. Why not? it's all impossible anyway. I was able to stick that and when I was done I felt recovered in about two minutes.

This just doesn't happen! That's a 50W improvement on both FTP and 5-minute efforts! Who sets a 5-minute PR at the end of a 20-minute test? On any other day, not me.

I checked this morning on a different bike (with a different power unit), and much of that power is still present so I know my Ergomo isn't f'ing with me.

I have never had that happen before, ever. I'm Mr.Slow-and-steady progress if I'm anything.

The athlete guinea pig in me is ecstatic at the numbers (more math tells me I'd do 27.7mph in a TT at that power!), but the scientist in me is completely puzzled.

I'm going to have to do some more testing surrounding fuel (maybe it was Bob's Red Mill Oats on Monday?), warmup (maybe it was just easing into it?), amount of rest (two days no cycling, one day hard ride, then something I care about?) and any other variables I can think of that may have resulted in blowing the doors off like that.

If I can make this happen in a race...

Anyway, I know there's some number-geeks out there, so I thought I'd share. Has anyone else had something like this happen? Total crap day followed by blowing the doors off? Any tricks you know?

And what's on tap for the Pescadero Suffer-fest on Saturday? Is my body going to be Dr.Jekyll, or Mr.Hyde? 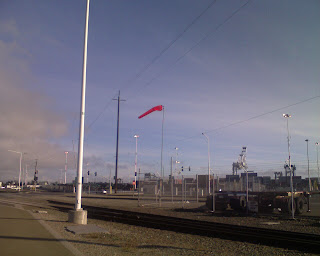 ah, bay area in the summer

it's crazy windy (check out that windsock from the port ride last night!)

without Joel and John out there attacking it never blew apart, but Nate English (soon-to-be-pro phenom) was trying his hardest.

Sean pulled him back, of course ;-)

Even had a MaryMaroon guest appearance. Good times