Morning Intervals
Like hitting legs with a hammer
Getting faster hurts 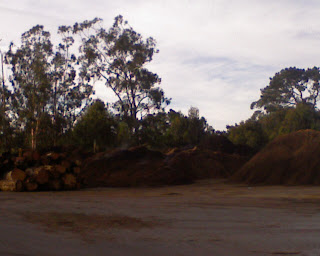 (I know, this picture is pretty pathetic)

So I ride the same route just about every morning. BART to Civic center, out to the panhandle and the Golden Gate Park polo grounds.

One of the roads I use to get there is a service road (it's the start of "Middle Road" I believe), and when I rolled by today it was as if there was a new Eucalyptus God, and he was angry

Apparently, all the storms tore up trees in the park, and I didn't know it but the service road I ride on is where the park service mulches everything.

I guess it's been long enough since the storm that the piles are fully active because they have clouds of steam on them.

The one pictured is 1 of maybe 3 or 4 massive heaps. 20 feet by 50 feet maybe. They all smell very eucalyptus-y which is pretty good actually.

Not sure about you but I like seeing how part of the park ecosystem works. So there's your Nature Moment of the day :-)

Clear your mind, and examine your assumptions 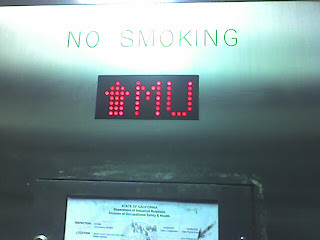 I like how every morning the BART elevator reminds me that questioning
what I'm doing is meaningless.

Should I bother waking up early to ride my bicycle?

What if it rains? 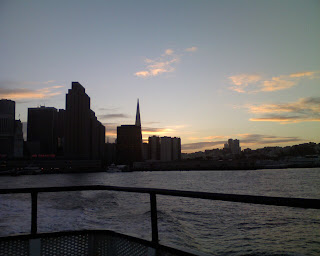 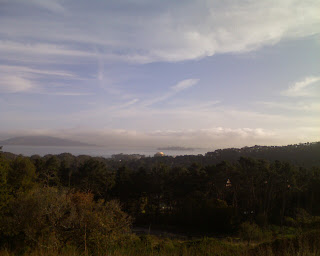 Piecing everything back together after getting hit by the truck.

Rode to work again Friday with a new phone and snapped the SF skyline sunset shot on the way home. Cliche but still irressistible.

The other one is morning on alcatraz and angel island. Pretty stuff. My bruises only have a couple more days to go before they're healed I think, and I got a new rack and put it on my race bike with the fenders. So I'm pretty sure I have one of the most expensive rain/commuter bikes around. Beats driving to work though and my real commuter bike should be fixed next week I think.

Still traveling and doing other stuff besides racing on the weekend. Lakeport this weekend and two weekends from now. Unsure about next weekend.

Other than that, it's interval time now and I find that after all the illness and travel this winter I'm stomping out around 255W at threshold instead of 270 or higher. Not to mention the 4 extra kilos I'm carrying (but it was winter...and vacation... ;-) )

Should make for plenty of work the next month as I claw my way back into fighting shape. I'll be back though, look out :-)

Knocked over by a truck 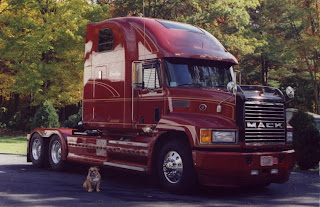 This is a Mack Truck. It looks like one I saw today.

So, I'm at the Port of Oakland.

I'm there every Tuesday.

I'm cruising around and not having a bad time even though the weather is pretty miserable (it's pretty much just pouring).

There's two lanes of traffic each direction, with this dead "lane" in the middle formed by two sets of double-yellow lines about one lanes-width apart, and there's a semi truck parked there near an entrance to one of the berths.

There's also a parking lane, which I'm riding in.

The semi-truck has been there, stationary, since I've been riding, and I'm on my third lap at this point.

As I get near him, with no signal, he all the sudden turns right, right into the berth entrance - crossing both lanes of traffic and headed *right* for me.

He admitted later to the police officer that he saw me but he didn't think I was moving very quickly. No, I'm not flattered by that.

I turn hard to the right when I realize it's really happening but it's too late. The infamous Right Hook got me.

His front-right fender nails me in the left thigh and knocks me forward and over the bike to the right where I skid to a stop in a heap in a puddle right in front of his thank-god-it-was-screeching-to-a-halt semi.

I was not happy, but I managed not to touch him or anything, I just told him that I was very angry at him. Then I called the police who (can you believe it?) showed up in about 5 minutes.

I made sure the truck was where it stopped when the police car got there - with its rear wheels in the double-yellow area and the nose in the turn-in. I can't think of a legal way for a truck to get in that orientation, which should factor for something.

While officer Johnson took a report (08-012887) Brian and Karla saw me and pulled in for a chat. It was freezing and wet and miserable and the Officer offered me a ride so I told 'em to scram before they shivered apart.

I got the ride home, and here I am now (after a warm bath).

My rear wheel looks like it's seen it's last port ride. But my phone appears to have revived (correction: it is, in fact, busted. Sigh), and my laptop still works (despite the rain ride and the crash - I love my Arkel Briefcase bag!). I'm going to have a deep bruise on the left thigh and I've got a little rash on the right hip. All in all, not so bad.

I've tried to think of what I can do differently, but I can't think of anything other than more lights on the front.

Please, for all your friends and family and loved ones that are out there living and playing near cars, drive safely when you're in one, mmkay? Thanks. 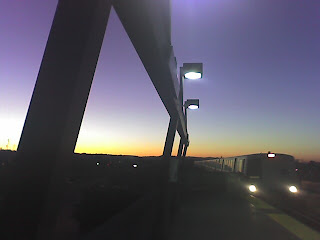 Me and the Missus both up and at 'em before dawn? On a Friday??

Fair weather though, and slated to stay that way all weekend. Tain't bad for a NorCal February.

The only question is to race or not to race. NorCal crit (in Santa Rosa) on Sunday, and the Tour of Cali starting too...I'm inclined to race I think.

Happy Friday to all

The ferry is so civilized... 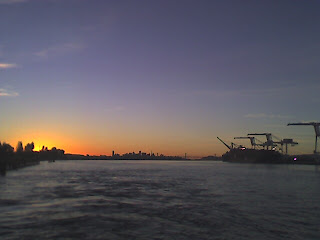 You don't get that view (or a bike rack) on BART, as much as I do appreciate BART

OK, I'm just blogging because I finished my book (guns germs and steel, thanks Sam) and I have nothing better to do.

Good pic though, no? Time to stare at it instead of typing...

Posted by Mike Hardy at 5:50 PM No comments:

Polo grounds not a secret... 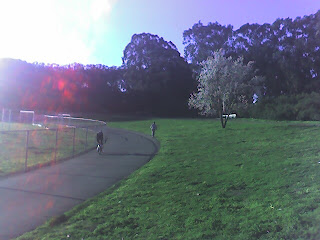 Saw Roaring Mouse team guys and a couple Freewheel bike shop (edit: found out one guy's name is Josh) guys out this morning.

I was doing my first batch of intervals for the year (5x5' on, 2' off at just over threshold, and yes they hurt plenty, thanks...).

This guy was just plain ripping around on his TT bike though. Fun to watch.

It was so windy even aquatic park had whitecaps in it though. Nearly blew over headed to work :-)

Happy Valentine's day to all

I guess spring has sprung in SF 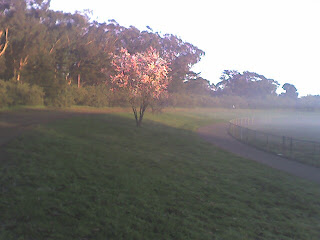 Hard to miss it today though... 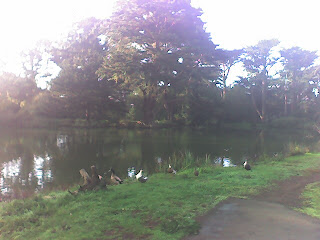 (a pond near the golden gate park polo grounds)

Here's hoping everyone gets their ducks in a row for a good weekend.

Looks like House of Pain tomorrow (7:15am @ Montclair Peet's) then maybe cheering at cherry pie Sunday.

Some commutes are prettier than others... 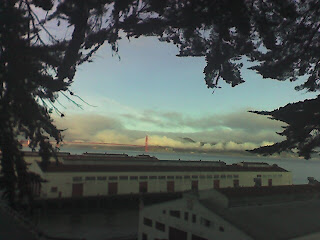 The morning commute today was a recovery ride after what looked to me like the first proper (as in painfully fast) POO ride of the year last night.

Recovery rides are always good for taking the scenery in, and ya gotta admit, a commute in San Francisco sure is scenic... 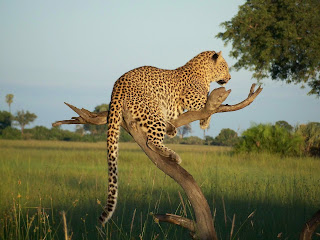 It was a whirlwind tour with 37-hour travel stints each to get there and back, then a blitz through South Africa (Cape Town and surroundings), Zimbabwe (Victoria Falls), Zambia (Livingstone Island), and finally Botswana (Linyanti and Jao).

Teresa and I are wildlife-lovers, and we stayed in wildlife areas the whole time we were in Botswana, so I have to say that was my favorite. But really just about every part of the whole trip was amazing.

Hopefully I'll have time to write it up more soon and post some other pictures, but until then you'll have to be satisfied with this picture of a wild leopard that we managed to track down (literally, using footprints) on the last day we were in Botswana.

We were approximately 10 meters from this cat, but it was pretty safe because was keeping its eye on a couple of spotted hyena slinking back to their den after what the tracks indicated was a blood-spilling altercation between a lioness and her cub. Oh, and there was a fish eagle (one of the largest eagles around) in the tree in the background. And a herd of Lechwe in the field just behind the tree. And...and...just a ridiculous amount of wildlife, really.

Can't make any of that up :-). We were all just sitting there in awe, taking it in.

I hope I get to go back.

Posted by Mike Hardy at 7:21 AM No comments: