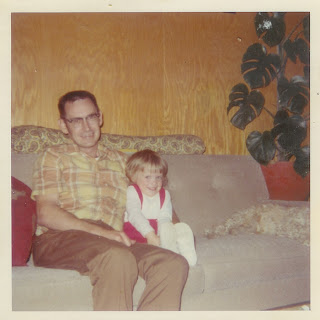 Pictures do say a thousand words.

We're still working through all the details, and probably will be for
quite some time, but Merritt passed away last Thursday. It wasn't easy,
but answering the call to help Merritt these last few months was an honor.

He was genuine guy, and a good one at that.

Teresa loved him dearly, and having spent the time I did with him, I
could see why.

Superweek tales from the White brothers

Russ and Greg White (Kovarus, and frequent Port Riders) are up in
SuperWeek racing in the cat 3 peloton, trying to show them a thing or two.

Looks like they need to be shown the way to some skills clinics...

It was really cool watching Karla kick ass and represent the Port Ride.
Here is update on what we've been up to.

The course was a very much like a cyclocross course and not every
interesting. A break of the 3 went up the road with a buddy of ours from
Nor Cal, Matt Talbot the clean racer. So, we chilled in the pack and did
a bit of blocking. Then, I lead out Greg for the field sprint. I railed
the inside of the first turn and kept the gas on. I pulled off on the
backside of the course and Greg was second wheel into the last turn.
There was a crash and he took off a easily won the sprint for 4^th .
Russ DNF

This course had a steady climb and a curving decent toward the finish.
Early in the race I'm a break and there was a miss communication with a
rider pulling through. The guy who flicked his elbow clipped and took
out the front wheel of the rider pulling through. I was right behind it
and we were going 35 mph, so I smacked the pavement really hard. The
SRAM neutral support guys couldn't repair my headset and they didn't
have a neutral bike for me, so I was done early on. I did bruise my
right hip badly.

Without me in the race, Greg had to cover more moves. Someone attacked
with 5 laps to go and he soloed for the win. Greg was 10^th wheel into
the last turn and the guy in front of him hit a cone it popped up and
almost nailed him in the head. The cone tagged the guy behind Greg and
he went down. The guy who hit the cone jumped on the inside, which was
wind protected. Greg followed and then unleashed his sprint to crush the
field sprint for 2^nd . Our host mom has a sweet video of Greg showing a
clean set of wheels to the field.

The course went endlessly up hill but in reality you would climb up a
hill then bomb down into the turn to go up the next hill. So it was a
funky 4 corner & 4 hill criterium. I felt too injured to race and took
an off day. The race stayed together until 2 to go when a tire blew out
in turn 3 and 10 guys and Greg got a gap on the field. After moving up
on the backside of the course, Greg was 6^th wheel into the last turn.
Greg jumped to start his sprint, his rear wheel skipped once and before
he knew it he was upside down and still clipped in. Greg landed on his
back and helmet and the bike flew 10 feet in the air. The helmet was
toasted and everyone was amazed that Greg was able to walk away with a
few minor scrapes.

Today's course looked like staircase and the pavement was very poor. It
had 8 turns and they were tight. The pace was high and I had a poor
start, I was annoyed with the way that riders were allowed to start
clipped in since you're supposed to have a foot down when the whistle is
blown. The cat 3 peloton was having trouble around turn 1 where there
were two crashes that saw guys hitting the mattresses covering the
parking meters. It was very sketchy and I rode at the back playing the
train conductor collecting tickets, chillin' as the the last man. Greg
was riding well in the pack and it was strung out. With 5 laps to go
Greg came back to check on me and I took his wheel. Then going around
turn 6, some douchebag in a gay ass pink kit dove the corner inside me
and took out my front wheel. WTF, he was fighting for my teammates'
wheel at the back of the peloton. I tumble and superman over the bars
and I scraped up my elbow. Greg didn't contest the sprint and finished
24th, Russ DNF

Right now the morale is kinda low. We are wearing quite a bit of
surgical netting because guys can't handle their bikes. But there is a
race tomorrow and we are hoping that out luck has turned.

I am not a smoker 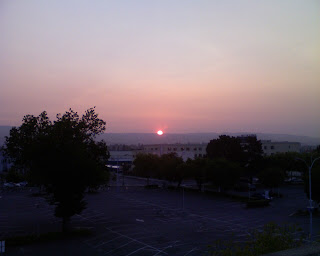 getting a bit sick of wildfires...
Posted by Mike Hardy at 6:20 AM No comments:

Good to be back! 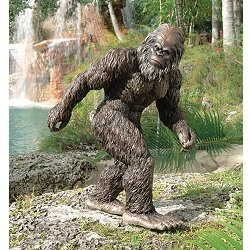 Even my wife is getting into the act and sending me funny pictures, so
I'll grace you with this fine product from these fine people:
http://www.designtoscano.com/product/garden+statues/fantasy+statues/assorted+creatures+outdoors/bigfoot%2C+the+garden+yeti+sculpture+-+db383049.do

As many of you know - I've been up in the far North Bay (Lakeport, to be
precise) doing what I can to help a family member that needs a hand. If
you didn't know, that's why I've been so MIA the last month or so.

Got back in town this week just in time for the port ride though, and
boy do I miss when it I'm not here. It's great to see everyone, even if
it's hard to talk while pushing so hard :-)

Missed a few though, where are the girls for instance? No Morgan, Karla
or Alice. Shouldn't Alice be getting close to healed now? I hope so. No
Justin either but Ryan was laying into people in his place. I'll give a
shout to Russ and Greg too - they're headed to SuperWeek next week and
it'd be cool to have some NorCal representin' up there.

Hopefully I'll be back to a semi-regular racing schedule in the near
future, but no guarantees.