Alright, so the masses (read as: my sole reader) demand new posts, so here you go.

What's been going on? Well, not too much - which is kind of the way I like it sometimes, especially after so many interesting times the last couple years. The last couple months, really since around October, have been very relaxed which lets me focus on some long-term goals, like developing completely pointless amounts of power on my bicycle.

To that end, I've settled back into my bike-commuting schedule (yes, even in the rain, much to my beloved wife's dismay) and have retrained from all the time off last year. In fact, from a foundation-laying perspective my endurance at this point is better than I ever remember it. I haven't surpassed my biggest week ever (that was on a Tour de France cyclo-touring trip - worth every penny if you ever get the chance), but I'm consistently getting over 300 miles a week and my body's gotten used to it.

Here's the charts-n-graphs for the data oriented 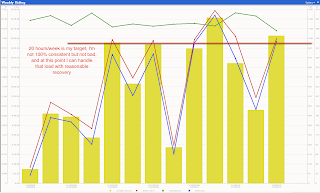 That's the weekly riding, which is a lot of stress on this old body (I'm a Master now by the way, so I can say that).

It feeds into short-term fatigue and long-term fitness though, and here's how those two things play out, with the 20 best 5-second, 1-minute, 5-minute and 20-minute points plotted on them. No peaking yet so my "Training Stress Balance" (aka "form") is pretty much non-existent - I'm fatigued - but my base level of fitness is very high at this point 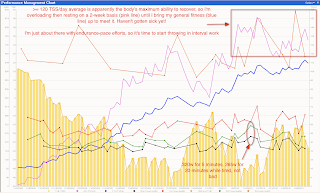 And that performance management chart, which helps keep me from overdoing it and getting sick or injured or burning out is feeding into an ever-improving ability to produce power for different durations. At this point my power curve looks about like it did when I was doing well in 3s races, and I think with a month or two of interval work I can move it up to be competitive in P12 and M35+-123 races. 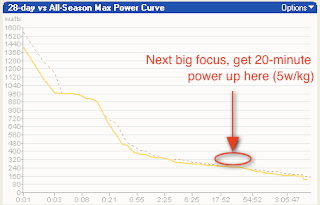 This last Sunday was the last day in the pre-season Early Birds criterium training series, which I have had the joy of being a mentor (3rd year) and a guest speaker (first time!) in this year. I hope I have helped make the racing a little safer for new folks this year, as that's the goal. Everyone seemed to have a good time, and they're great training days.

My typical weekend involved trying to get a century in on Saturday at a nice endurance pace, then riding to the Early Birds (20 miles), mentoring the clinics and the races then doing the P123 race (around 85 miles of crit racing total) then riding home for a total of 125 or so miles and around 7 hours, mostly that looked like this: 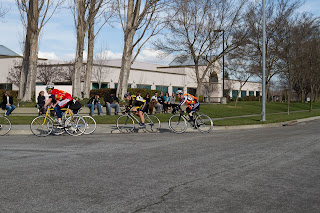 ...which is me drafting off a huge pack and generally riding at endurance or tempo for most of the day. Not too bad, except you know what you look like after 6 hours of following wheels while wearing sunscreen? 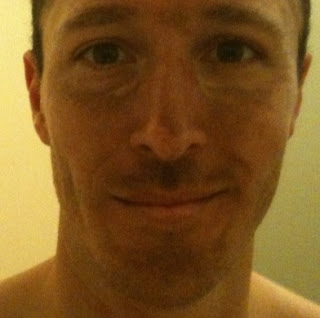 Yeah, not a pretty sight. I hesitate to think what my lungs look like...

Despite riding quite a bit before this last race - and the one that kicks off the season by actually being scored and counting, I managed 17th with a couple actual pros in the field and had I not completely messed up the last three corners *in a row* I could have done a lot better.

Here's a good example of what a last lap shouldn't look like - check the speed dips in the last two minutes as I blow the positioning heading into the corners, have to brake, and then have to re-accelerate. 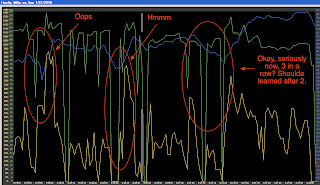 Pretty sad, and a mistake I hope not to repeat

That's pretty much it for the pre-season. I've got the endurance training in. The hard work (read: nausea-inducing intervals) is just starting, and it's time for some real racing.

Major goals this season are to stay healthy, have fun, do better in Time Trials, do better climbing, and get some results in crits. We'll see how it goes

Now THAT's the Mike I know and love. Enough data to make a mathlete giddy with excitement and enough commentary to make for a good read. One of these days you'll actually have to tell me what all that data means though! And when are we getting together next? Now that I'm getting a few miles in again, we need to get out there together.

Okay Anonymous - I'm usually down to ride with anyone, especially someone that uses the word mathlete :-), but you have to let me know who you are or it'll be difficult to get a ride going ;-)

If you don't know, then you suck and you should pedal faster... ;)And another thing. We probably have similar goals for where our 20 minute power should be, but tragically for me that's 3.5 W/kg instead of 5. And the likelihood that I'll ever sustain 450 watts for 20 minutes approaches 0...

That's it then, I'm going to have to head to Pasadena soon to see about this whole "pedaling faster" thing.

So that establishes credibility.

Hey, dare to dream! Would have won the TT: http://www.velopromo.com/mdra-rl08.htm

Fiddle with the mph to get the winning time (28.5mph or so) and you'll see you only need 4W/Kg in a TT to be pretty competitive in the P12.

That's so doable it's more like "dare to do" as opposed to "dare to dream"...