Menlo Park Gran Prix today. The weather forecast was bad, but I pre-registered, and I'll be damned if I'll throw away money instead of racing in crappy weather. So there I was, in Menlo Park.

Here's how that worked out: 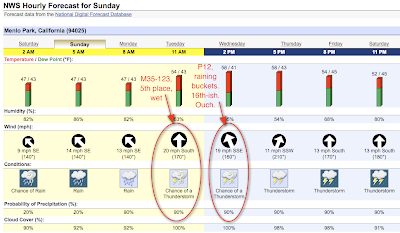 Yeah, so that was wet. "Holy crap!", "Really?" wet for the P12. It's Paris-Roubaix day though, so why not suffer a little in sympathy?

5th in the Masters race was pretty hot though, I'm happy with that since I wasn't just sitting in for the sprint, I was actively trying to get into breaks, went with a couple moves and actually bridged to a couple of threatening moves as well. If I'd saved those matches I'd have done better, but is that racing? I was about 10 feet from 2nd place, and if I had a lesson learned it's that the rules I have for what wheel to be on in the last corner must be followed. The final straight was about 250 meters with a headwind, and 3rd wheel would have been perfect. I was 6th wheel or so, and that's the way it goes. My new "chicane rule" ("you can't move up in a chicane, set up to exit fast") formulated after Merco was correct and worked well. Also, having a nearly full dry set of kit for the next race was good thinking. Shouts to Joel for leading the sprint forever into that headwind and coming away with 2nd. Hard man.

In between the races I had the pleasure of watching Mary Maroon, local not-quite-pro P12 gal working a 5-person break with some paid athletes, and trashing two of them in the finale to notch a 3rd. Nicely done, Mary.

Did I mention the P12 was really wet? Torrential rain. Wind. Still had 35 guys out there and many of them were really fast. I was torched pretty good from the Masters race but hung in okay. Even felt like I was sort of recovering in parts. When it was "go" time for the sprint though I didn't have any matches left - just determination. I didn't get gapped off the real sprinters but I couldn't make the moves with them and surf the draft for a real position so I was basically rolling it in. Shouts to Sean for breaking into the top 10

I'm threatening to have some good form here though, maybe I'll get a P12 result before too long, who knows? Just from Masters races I've got 5 or 7 points depending on how you count them though. Maybe I'll get a cat 1 card if I can keep progressing.

I'll see what I can do to catch up on tips-n-tricks and results from the last few races as well. I wrote about the Ronde last, since then I've done Merco crit and road race, Madera stage race (crit - 7th!, TT, RR - 2nd!), Copperopolis RR, Napa River Gran _rix and now the Menlo Park Gran Prix. Quite a bit of racing but no bloggin'. I'm having fun though. Hope you are out there...
Posted by Mike Hardy at 4:28 PM

Way to slog it out at Menlo today. The conditions were the same up at Spring Hill.