Always the Bridesmaid, but I'll Take It - CCCX Fall #3

Hard to believe the 2010 season is over, but this is it - the last race of the year for me has come and gone. Yesterday was the CCCX Fall Series Circuit Race #3.

This race is held at Fort Ord near Monterey, and I've done this particular circuit once already when I did the 2nd race in this series a month back and got a 2nd place for my efforts (ha cha cha).

The good thing about this course is that it only has one flat section - the rest is either uphill or downhill. The uphills are short enough that they favor a punchier rider though - not a pure climber, and the final sprint is uphill. I happen to be a punchy climber because I'm basically a small sprinter, and uphill sprints usually favor me. So I love this course.

Here's the profile from one lap of my data: 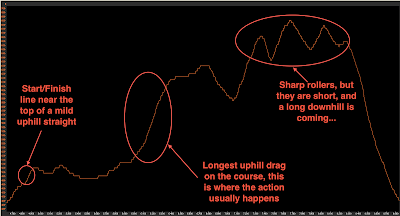 Since I got second place here last time, I'll admit I dared to think I might win this race, and I was definitely hoping to get some upgrade points.

Strategically, there are 4 CalGiant team members here, including the basically-stronger-than-everyone Jesse Moore who showed up to try clinch the P12 BAR competition. There are two Metromint guys, and a bunch of solo riders including myself, in a small (15 or so) field. This course and a small field reward breakaways, so I'm not going to let anything go without me, and I'm looking to have at least one CalGiant and one Metromint rider for the perfect move. I'm hoping for some reason Jesse Moore won't be in the move.

We start off, and the first time up the hill a CalGiant guy puts in an easy leg-testing attack. The whole pack essentially covers it and we're strung out but all together. Few are suffering yet. The second lap we head up the hill and it's on for real. The same CalGiant guy goes again but harder and sustained this time and pretty soon it's him, me, a second CalGiant guy, both Metromint riders, and a ClifBar rider. Unless something happens, this is the break, and we have 75 minutes to go. 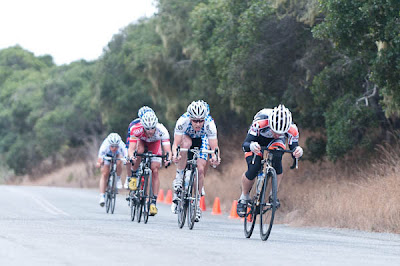 We hit the finish hill for the 3rd lap and there's a prime on. Jesse goes to lead out his teammate, the ClifBar guy is gone, the Metromint rider is gapped hard, and I'm just a small gap behind the two CalGiant riders. Jesse looks around, sees the chaos and decides to keep his foot on the gas. I see immediately from his body posture that he's not letting up so I sprint across the gap and jump on his wheel.

At this point, It's Jesse and I in the front, a second CalGiant and a Metromint together in 3rd and 4th, and shrapnel behind. We have around an hour to go. Being in a two-person time trial with Jesse Moore isn't exactly how I pictured the day going. Jesse Moore wins time trials and hill climbs, but loses sprints. I suck at time trials, do okay on hill climbs, but win sprints. I'm pretty sure how this will play out, and I'm just hoping to survive. Sure enough Jesse keeps the throttle on long enough that I'm just about to crack within 2 minutes, but I just manage to hang on.


For the next 38 minutes I do what I can to help Jesse ride, which amounted to pulling around 2 minutes total in a few short, weak efforts, while hanging on for dear life as he motored steadily up all the hills just a couple percent under my maximum. I've given myself tough grades for not being tenacious enough over the season and I'll admit to being close to blowing up several times and thinking about the pain and weakness. That doesn't help. I consciously made an effort to use all the physical tricks I could, and to mentally repeat to myself that this was the reason I train so hard. This was the reason I race. You don't get to be in the winning break very often, and I wasn't going to give it up until I was completely shelled.

With a lap and a half to go, and a 3-minute gap, Jesse figured I could make it in by myself, so he throttled up one last time on the rollers and I blew apart completely - total toddler on a tricycle action. Now I'm solo in no-man's land behind the leader but still in front of the pack. Despite being horrible at time trials I figure even I can't lose 3 minutes in a lap so I pull it together, put my head down, and power through the final lap to hold on for second place.

I have to say, this was something like thorough ass-whipping number 5 (that'd be Mount Tam, Henleyville, Everest Challenge and now CCCX), 3 weekends in a row, from Jesse Moore, but I wouldn't have taken 2nd without him being nice about this one, so chapeau, sir. Strong and nice, a rare combo, and much appreciated. 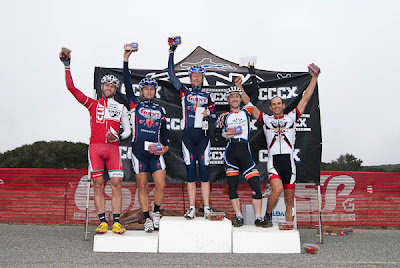 That's a pretty satisfying way to end the season, I have to say. The points earned were enough to get me second in the series (50 points, vs 51 for David Wyandt) but since the winner wasn't there and I was close they gave the series champ hoodie to me. 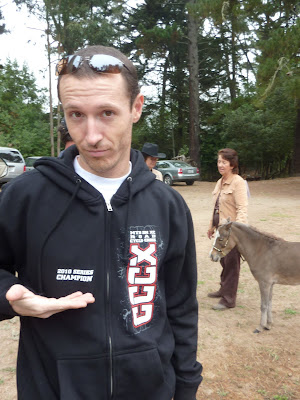 Take that David Wyandt, I'm going to be the CCCX Fall Series P12 poser all year, and there's nothing you can do about it. At least the one time David and I were both there, I edged him out, so I don't feel too badly about it.

And yes, I take all my loot pictures in front of miniature horses to make myself look taller.

I started the season with the goal to get a top-10 in the P12, then hopefully a top-5, to learn how to ride breakaways, and to give the Everest Challenge a good go. I ended the season with 4 2nd places, a 4th, 2 5ths, 2 6ths, and 5 other top-10s of various kinds (E2, P12 and M35-123). That's really way more than I could have hoped for. I had no goal in mind whatsoever of upgrading to Category 1 but here I sit with 21 upgrade points! I'm also going to end up somewhere in the top-40 of the NCNCA P12 BAR competition. Quite a year.

I looked up some yearlong stats for the curious:

To anyone that's supported, encouraged, or just followed along this year - thanks. It's been a fun ride.
Posted by Mike Hardy at 7:33 AM

Wow! Mike! I am utterly amazed! You are a force to be reckoned with man! Do let me in on the winter training tips when you get a chance! Nice and a way above bar finish for the season!

Inspiring; cliff-hanging; tense; heartwarming; and, very funny. I'm proud to be the Dad of you. Awesome season!!

Wonderful report on your 2010 accomplishments. You will do even better next year.

Uhhh, dude, what's with the tiny horse behind you?

Doesn't everyone go to miniature horse and pony shows to thank their wives for putting up with their racing...I mean...celebrate their success?

Believe it or not, it was kind of fun, though the snack stand was a total racket. And it's in the Oakland Hills behind my house - normally where Team Oakland practices CX racing, except that day

(and for some reason I can't log in to google at the moment, but it's me, I swear)