For a little course knowledge, it's important to know that historically Day 1 is stupendously hard, and Day 2 is merely tremendously hard. There's a difference. Day 1 usually took nearly 6 hours and 45 minutes while Day 2 will only take 5 hours if I hit my plan. During a heat wave, where every minute into the afternoon is another minute roasting, that's a big deal - during Day 2 I should be up at high altitudes on the final climb before things get really oven hot - and since a heat symptom related to hydration/electrolyte balance is likely what cracked me and took me off plan yesterday, I'm looking forward to today.

Before describing the day I'll talk a little bit more about preparation, since "looking forward" to a hard 5 hour day, after a 6.75 hour day, doesn't just happen.

Sports science wise, I attempted to do five big things in parallel to prepare for this event. I discussed weight last time (I dropped a bunch myself, and switched to lighter equipment), and I also discussed gearing last time (I switched to much lower gears so I could maintain higher cadence, thereby decrease peak pedal force per pedal revolution, and hopefully avoid cramps).

The three things I'll mention this time are:

1) that I altered my training program to be less focused on long endurance training and more focused on short, hard intervals. I mostly did 30-second and 1-minute intervals in the months leading up to this (with good effect), and only did a couple long rides. I think that mostly worked, but I should have done a couple longer rides at threshold I think. There's only so much time though - and I may just need another year to slowly get stronger.

2) I did more altitude training this year to make sure I was acclimatized - I spent 5 days at 7800' 2.5 weeks before the event in the hopes of triggering some red blood cell production, and I spent 3 nights at 7800' prior to the event to normalize blood plasma volume. I'm not sure if this worked or not. I think it helped, possibly 5% or so. It definitely didn't hurt, and it provided for interesting observations on just how low-pressure the atmosphere really is at 7800'. This is your snack food at altitude, for instance: 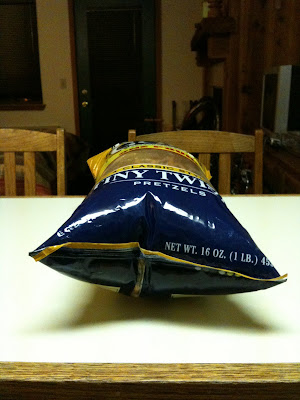 3) Nutrition - I really focused on electrolyte replacement and nutrition strategies this year so that I wouldn't start cramping despite pushing for a PR at a distance I don't normally ride. Specifically I finally figured out how to take the pill-based electrolytes you really need (drinks just don't have enough), without fumbling around a lot. Behold the "pill the dog" method of electrolyte consumption, based on Clif Bloks: 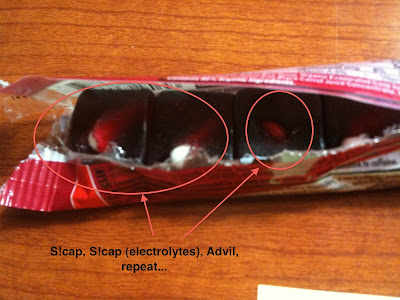 This makes it really easy to get the stuff you need.

The only problem then is getting the stuff you need when you need it, since timing is important and working out really hard has a habit of making me a wee bit stupid. My strategy there is to map out a plan the night before that has course information and when to eat what, so even when I'm an idiot I get it right. I just tape it to my top tube: 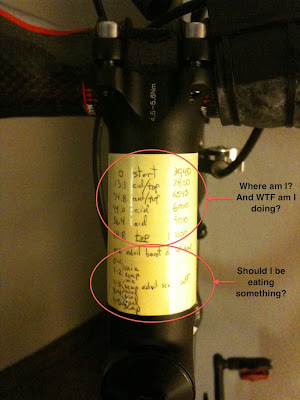 From my perspective, all this came together perfectly. I rode a really strong race, set personal records for power produced and times on this course, finished strong on the second day, and generally didn't have a lot of problems given the extreme difficulty of this race - just a little cramping on day 1. Unfortunately, more strong dudes then ever showed up, so that even though I had a great race on an absolute scale, I did worse relatively - I ended up 14th in the P12 category, and came away with no upgrade points, and only $45 in prize money. I'll admit I was hoping for more and I have a little "woulda coulda" afterwards (for instance, if I hadn't cramped I would have been around 25 minute faster on day 1...that's maybe 9th place...), but I'll have to take what I can get.

As the hardest race I do all year, and a cap to the season, it's sort of like a final exam. In that respect I'll be a little tough on myself and give myself a B+. I did cramp on Day one and I think it was avoidable. Other than that though, I rocked it and a B+ isn't bad.

Thanks to everyone that supported me as I tilted at this windmill - lots of encouragement from my teammates and fellow racers, and tons of understanding from my wife. I'm not a complete lone wolf, I can't do it without you.

For the data junkies, here's what the data looked like. I put two lines in indicating my target, and what I calculated after-the-fact based on the winning time would have been the power I'd have needed to win. I'm a fair ways off - 20%, and that explains why I got 14th GC instead of 1st for sure. If I had 10% more power I'd have been 7th or so I think. Maybe next year...One fun note is the top speed - imagine doing that on your bike. Also, you can see on the first climb I was cranking out tons of power the first 10 minutes or so. I specifically stayed with the lead group in order to see exactly how hard they were riding even though I knew I wouldn't stay there all day. Turned out to be 280-300W to start the day - or 4.8W/Kg or so. They faded by the end, but that's a stout effort. If you can do that for a couple hours, you could win... 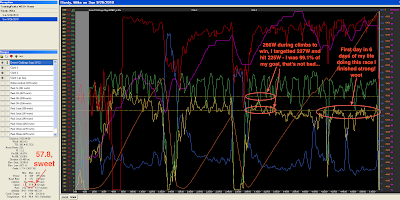 Here's some other pictures if you're curious - they really capture the desolation out there well - luckily there's a lot more camaraderie then you can see from this lens.

One more race this year - the CCCX Fall Series where I got 2nd last time, then the season's done.

So incredible, Mike! Love those three tips, wish we had some mountains here in Illinois to help increase the red blood cell levels. So fun...the pictures and descriptions are just wonderful.
Becky