For most people when I describe the Everest Challenge it's like trying to explain a trillion. It's just too much, it's too far away from what they've experienced - both geographically and cycling-wise.

I think that's a shame though, because then how can I explain why I do it? I mean, it's a tough physical challenge, and no one cares how I do. I have to want to do it. Why?

One of the main reason I do it is for the geography, Inyo County and the Owens River Valley (where the EC is) is gorgeous people! You have to see it. One of these days I'm going to do a non-cycling trip this way that goes something like this: drive into Yosemite and stay in the lodge there. Hang out in the Owen's River Valley a couple days. Head to Death Valley to see the bloom and stay in the great hotel there.

Here's why that's a good thing - this is the big picture view of where this place is and generally what it looks like, relative to the Bay Area, with Bishop (the home base) and the 6 climb end points circled:

So, you go across Yosemite via Tioga Pass. You drop down the backside of the Sierras and you're in a valley (still at 7000' though!). You head South past Mono Lake, and pretty soon you pass Mammoth Lakes (where I'm staying for a couple nights, quite nice, 7800'). Keep heading south a bit more on 395 and you drop into the Owens River Valley at around 4000', nestled in between the Sierras on the West, and a ridge separating Owens River Valley from Death Valley. et voila.

Zooming in a bit, here's the 6 climbs we do. Physically each is epic, but if you look at the geography, that's the thing. Glaciers. High mountain lakes. Snowcaps. Massive ravines. Green valleys. The oldest tree in the world (no joke!). I can just about reach out and touch each one of these things on the climbs, depending on the climb. 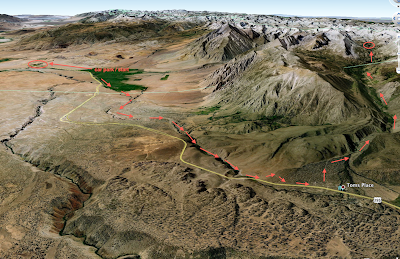 This is a tough one. Highest point in the race, 10,100'. There's glaciers up there. Beautiful fishing lake. 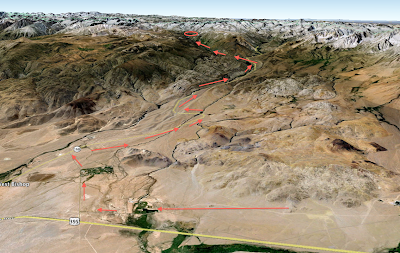 This is a killer - end of the day, 6000' climb that finishes just under 10,000'. Really pretty at the top though. Aspen trees all over the hillside on fire with golden leaves (I saw them today). Mountain lakes, snow packs, etc. Starting the second day out right - climb up to just under 7800', the last climb into the Sierras, West of Owen's River Valley. 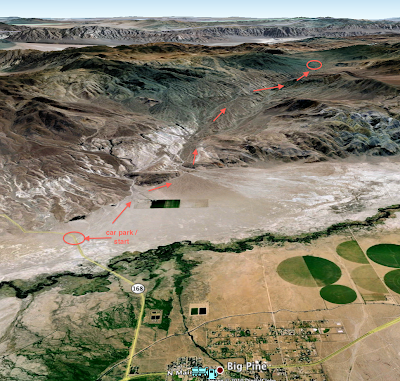 Now we're heading East - these are some moon-scape / desert conditions on the ridge in between Owen's River Valley and Death Valley. This climb is also a bit of filler really - same as the middle climb of Day 1. It's in a steep ravine though and is still pretty. 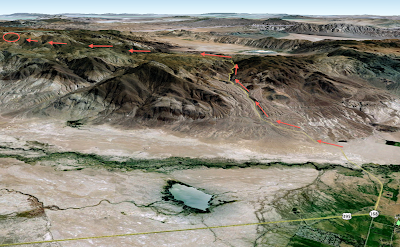 Final climb of the event - this climbs up to the Ancient Bristlecone Forest, which has the oldest living tree in it. They're scraggly little oxygen-starved, wind-blasted things, those bristlecones. Makes you think about what it takes to survive 10,000 years though, and what those years will do to you. The view all around from this point is amazing, as are the burritos cooked up by the event's support crew.

There you have it - a little bit of the visual of the event. I think that's important because it's a feast for the eyes, and makes it worthwhile.
Posted by Mike Hardy at 11:50 PM

Looks like you're going to have a good day in the saddle!

Michael,
May I please send this post to my brother in law, Ted Clark? He's a geologist and he once dragged us up that mountain to see the 25,000 year old bristle cone pine trees. I can't believe you're biking it as we already felt out of breath just driving it!
Becky Boonman

Certainly, Anonymous Boonman :-). Everything here is "public" - fair game for forwardin' as you see fit.