Wow, that was hard. That's banal, but pretty much what I think after the first day of the Everest Challenge every time. I don't even stop for food or water on training rides, but I had to stop twice today (for around 5 minutes total) to work a cramp out. Tough day.

Similar to the post describing the Everest Challenge though, I'm going to try to use pictures, because words don't really describe it. And today was hard enough I'm literally dyslexic right now anyway, and I don't want any accidental malaprops.

Herewith, the things that stood out to me most today:


The heat was the story today. I actually *over* drank to compensate (it is possible), which triggered a bit of cramping, but after not drinking most of the final climb (2 hours) I wasn't feeling so bad at the top. This is what it did to me though - same story on all parts of clothing: 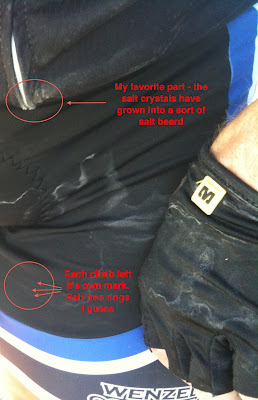 So with the heat, the major salt accumulation (thank you s!caps) etc, I still did okay. Here's the data - I was on steady top-10 (*maybe* somewhere around 6th) pace, reeling people in, until I just cracked. Managed to hold the same power post-crack that I had in 2007, so I can't complain too much, but oh what could have been. If I'd stayed on pre-crack pace my math says I would have chopped 25 minutes off my time. Ouch! Look at that high temperature in the sun:

So, I'm all cracked up with just under an hour and a half to go. How did I survive? Well, I built a bike with ridiculously tiny gears. I was getting a little self-conscious while test riding it the last couple weeks as everyone was quick to poke fun at a 33x32 low gear, but I stuck with it and damn if it didn't allow me to get myself together from a major cramp and finish okay: 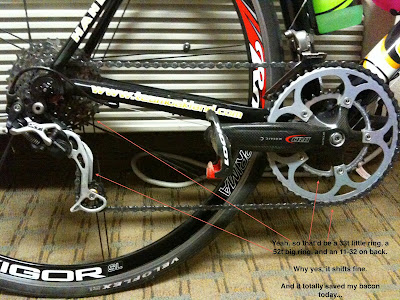 The other saving grace was that I worked on the denominator of "power to weight" and went on a major personal remodeling project this year. I lost just about every bit of body fat I could and lemme tell ya, *much* nicer not hauling that up these hills. I do miss pizza though: 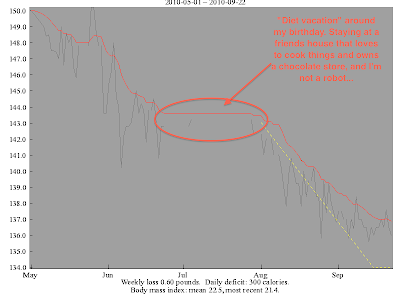 After all the data and sweaty body parts, here's your unicorn chaser - the lake at the top of the first climb near Mosquito Flats. Check out the Aspens in blazing fall color: 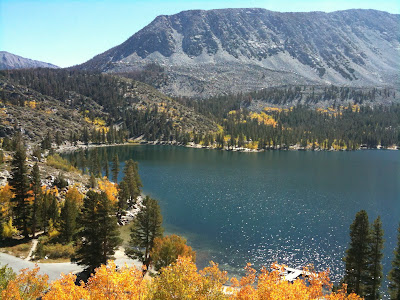