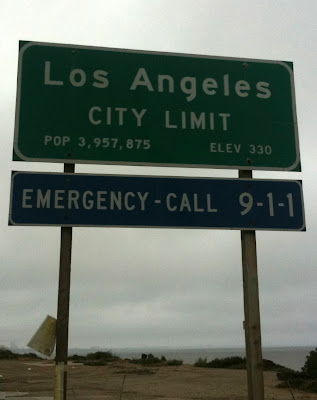 Alright! This is it! One more massive ride living out of a suitcase and I'll be happily back to civilization. Don't get me wrong, I enjoyed every day but when you know the end is coming, you fixate on the finish line, right?

So off we go - Santa Barbara to Altadena (a city outside of Los Angeles, near Pasadena, but you have to ride through LA to get there)

One note though - I will admit I felt pretty creaky this morning. Sore and stiff - by the end of yesterday I felt good, but my body's definitely letting me know it's taking a beating. I'm ignoring it. 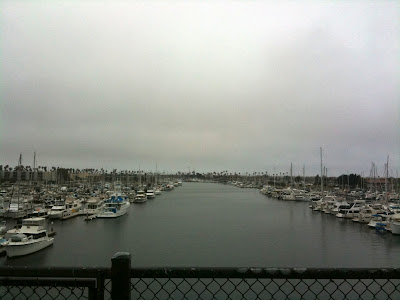 People say Southern California is all about "car culture", but really all the way from Santa Barbara through Ventura and Oxnard etc, it's all about boats. There must be two boats for every person there were so many boats. And every single one has some sort of punny name or attempt at a joke for a name like "Hey Sailor". Does anyone actually call their boat by those names? "Hey honey, let's take Hey Sailor out for a cruise". Has no panache. You say you want to take the boat out for a cruise, don't you? So what's with the name? Humans are silly. 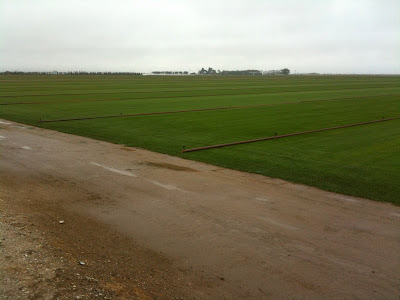 Gil, I know how important a perfect yard is to you, and I've apparently found the secret sod growing grounds. Oxnard - look 'em up 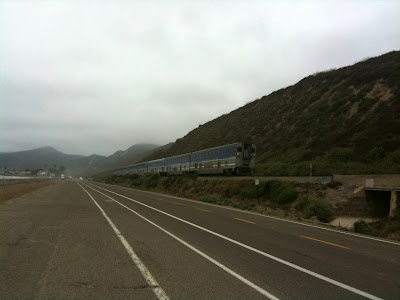 Amtrak gets a bad rap. Yes, they're late. Get over it. They have huge picture windows in the cars. They have wine and cheese tastings. And they run up and down the coast. Teresa and I have done Oakland to Seattle twice, it was wonderful. I want to do the Southern stretch at some point. This is the Surfliner rolling North, near Malibu. 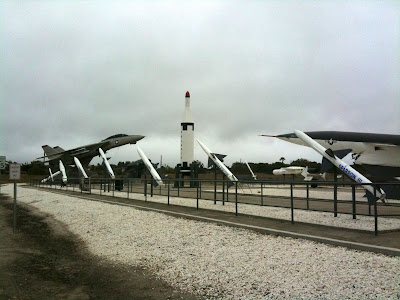 Hey kids! Let's go the missile park! Yaaayyy! Dad Dad Dad! Can I play on the Bullpup II? Can I? This was a real "Missile Park" (you can play on them!) outside one of the 532 military installations between Santa Barbara and Los Angeles. 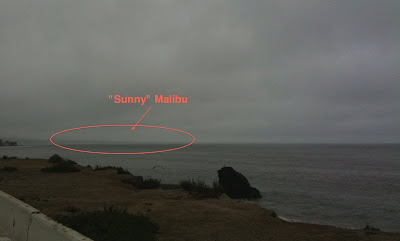 I'm trying not to whine about it, but if you haven't noticed in the rest of the pics, the sky is a bit...leaden. The first 86 miles of this ride it was so foggy it was basically light rain. Or heavy mist. I don't know but if you live on the coast you probably have 30 names for the fog-to-downpour spectrum, and on a 1 to 30 scale it was maybe 6. 6 means you are wet but you aren't soaked through, and you have water dripping off your helmet and can't wear your glasses. 5 hours of that. So that's lovely Malibu in the distance, mmm, Califonia dreamin' today

I couldn't take any more gray pictures after that so I put my mini-ipad away and put the hammer down to get 'er done. From mile 86 to 100 or so was still gray (but not wet anymore at least) then I crested the hill between LA and some other part of LA and holy crap it was sunny and gorgeous. Like two cups of coffee, a huge mood booster.

It was also LA rush hour and complete grid lock. Now it's "car culture" time. Poor car people, I passed and repassed the same Ferrari up a 10% grade for 10 minutes, and I was on a sidewalk. He probably wished he'd saved the money and gotten a segway instead, his commute would be quicker. I averaged .4 horsepower and beat him over the hill. Come on cyclists, you love that 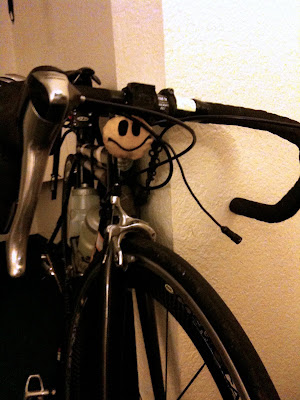 One final picture - I don't go on crazy adventures without a stuffed toy I picked up on the first crazy adventure I had (camping trip) called "The Happy Dot". It reminds you to be less serious. It's about a foot wide though, so Teresa made me a mini-Happy Dot to keep the tradition alive, and he cleared the way for me on the ride. Sort of like the "evil eye" thing from Asia, but more positive. He did a good job, because I made it in just fine.

Thanks a bunch for all the comments and contact while I was trekking, I had lots of good mind-wandering time but I wasn't lonely with you guys in mind. Also there was always some point during each day where I'd run low on energy or water or a foot would hurt or something, but I could feel the support vibrating with texts in my pocket. That helped a lot - this was supposed to be fun and that helped keep it that way.

So there it is - I really needed an adventure and I got one. Now for a couple days of R-n-R then back to the real world.

WOW! 17.2 average mph. despite all those mountains...watch out Lance Armstrong! The best part: you shared it with all of us on FB and your blog, so we got to hitch a ride with you down the coast. Thanks for all and congrats. ~Becky Boonman

How many extra miles did your unintentional "left turn at Encinco" cost you?

Becky - I wish I had the whole Radio Shack team to draft off of until the last hill like Lance does! Its a little humbling to know that I have the actual data and he's 34% stronger than me when I'm fully trained. Which is sort of like "hey, I can run a 4-minute mile, I'm awesome", "oh, I do it in 2:38". The mind boggles

Teresa - I'm not exactly sure. I honestly thought it was going to be a 115 mile ride the last day but it ended up being 138.2. I think I went about 5-6 miles out of the way, and since I was feeling inexplicably good Stu and I took a longer (but prettier!) route home to end the trek on a good note.

Since the last day of the trek was so big Stu and I decided to keep it short for the ride around town today and only did 66 miles. I probably need help ;-)

I am looking into organizing a bike trip next summer (Aug. 2012) for myself and a couple of my nephews. Thinking about starting from Carmel and making our way down to Malibu. Can you share your route with me?

Hey anonymous - I used the "adventure cycling association"s "pacific coast highway" route. I put those in quotes because those are the google terms you need. The route is great, and it is even marked with road signs in many places, so it is relatively easy to follow even though it zig zags around in some spots to keep you on good quiet cycling roads where possible. Make sure they are comfortable in traffic though, there are a few stretches where the only way is on the highway 1/101 (running together) shoulder. This didn't bother me but I'm pretty tolerant :-), and the ride in general was well worth it. The big sur stretch was probably my favorite, and the quietes bit, with the San Luis obispo through Lompoc stretch also really quiet. Good luck!