Lots of things going on, but not much writing about them. That's okay
though, one of the mottos you could live by, were you so inclined is:

Although now that I think about it, you'd probably be a pretty reclusive
dude if you did that. Maybe 10 rides or so, and it's probably better to
have more than one friend. But you get my drift.

At any rate, I did Martinez on Saturday. That race is brought to you by
the letter 'P', because that's what the course looks like. It's
extremely technical, with a "dynamic" (read: changes all the time)
surface. I slid the rear through one corner at one point, and clipped a
pedal in another. That's when you know it's technical. Of course, I
clipped the pedal while I was second wheel in the second to last corner,
which you could correctly classify as "screwing up a sprint", so instead
of following Mr.First Wheel (Rob Dahl, of Metromint) like white on rice
then blasting around him for the win, I had a little mini-pack right on
my wheel and lost Rob's wheel, and they all came around me for 5th.

The lesson I'm taking out of that is that in the last few corners of a
race it is much much much more important to put big power down *into*
the corner and stop pedaling then it is to gimp into the corner and try
to get on the power earlier to make up for it. One way has brought me at
least 4 podiums, and the other way is top-10 land. I'm not complaining,
but if you want to be a killer you've got to think about the kill, not
8th place or similar.

Even the cat 3s got money though, check me out, I'm quitting my day job. 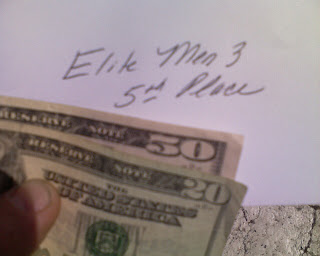 Other thoughts...I've got them cat 2 points now, and they're burning a
hole in my pocket. I went out on Saturday night (Happy Birthday, Brent)
and didn't want the early start time at Santa Cruz, so I pre-rode the
Wente Vineyards RR course on Sunday instead to see whether it suited me
or not.

The question I've got is, will it be my debut in the P12 field?

I think the course actually did suit me, so I think it might be my
debut. I also threw in a lap of Patterson, and at around 2pm while it
was windy in SF and Oakland, it was a full gale up there. 50mph winds? I
don't think I'm exaggerating - Toby and Aris were with me, they can tell
you. Epic. Great fun.

I'm still on the fence though. What has more value, getting your teeth
kicked in with the P12 to learn the ropes there, or doing the E3 race
where I'm relatively stronger and trying a hard attacking style to get
used to attacks etc.

Am I a wuss for leaning towards the E3? Probably, but so be it. I'm
going to pre-reg for the E3 (sorry Joel) and move the registration if
Madera forces me out or I choose different.

What else is going on? Your moment of zen is that this morning I did the
long form of my commute (lapping at the Polo Fields and back) so I was
out and about in morning rush hour for a couple hours and there was not
a single incident of something with a motor nearly killing me. Total
car/bike harmony. That's the first time since I've been bike commuting
in November-ish 2007 that this has happened. I hope it's a trend...

Oh, and the police report from when a the semi nailed me came back, and
it says what I need it so say. Unfortunately, the guy's insurance
company is non-responsive. I'll get 'em though.

hairy-man: there is absolutely NO reason why you should be continuing to do races in the 3's. The P12's is where you belong, I know you and I know how you ride. The races are more fun too, and you get better and better with each. Throw it down, let's go!!! Ryan

Ha! Nice to hear from you Ryan. That right there is enough rah rah to make me lean towards the P12. Joel would normally be enough but I'm immune to him now after hearing it for a while ;-)

I'll decide the Monday after Madera when I see how I stack up there.

All I can say is that you'll like it a lot, you'll be challenged, you won't get dropped (at least super early in the races), you'll improve a lot, and it's really positive racing with true tactics (as opposed to the 3's where everybody eyes those 10 tough guys making it more trench warfare). Not that the 3's aren't great and still bloody hard, but I don't know, I think you'll enjoy yourself a lot in the P12's.
Ryan

minus the extra "the"

I only wish :-). I did a final TT test Tuesday and the gear is willing but the legs are weak. TTs are my largest weakness right now, and the power/speed I was able to roll seems to have me set up for a top-10 if I'm lucky, and a win is not very likely.

hi mike! i think i saw you yesterday (sunday) going down broadway off tunnel? (i was heading up). congrats on the soon to be upgrade!

my question, though, is:

Last night I was headed to a dinner party in Sausalito, so it must've been someone else

I used to race the track down at the Alkek Velodrome in Houston, TX.

My front tri-spoke is actually from those days - I still have the track axles and cogs for it - it turns into a track rear wheel, believe it or not.

I just got a power meter that will work with track cranks (gotta have my power data, after all)

And finally, now that I'm about to be a 2, I can do the accelerated Hellyer licensing thing so I don't blow a billion hours just getting to race.

All I need is a track frame, and I'm saving my pennies. I'll be down there before long.

So it's all in the slow-moving master plan ;-)

I'll do it before I get into mountain biking anyway (sorry Sean). Last MTB ride I went on I remembered how close you come to injury at all times...