So today was Day 1 of the official Team Oakland bike race weekend - the Ronde van Brisbeen.

Day 1 this year was the "Lowlands" (Sierra Point Criterium), a reversal of venue order from previous years in order to have less truck traffic on the Highlands course since it'll be on a Sunday instead of a Saturday.

First, a huge shout to all Team Oakland folks that set up the course, it was beautiful, Tom Simpson of Pilarcitos who always runs a good race, Geoff Gunderson for knocking this whole thing together, everyone that marshalled and of course the tear down crew. It takes a lot of folks to run a race. And most of them actually got to race too - here's the team tent with the crew powering a few lightbulbs in various stages of warmup and warmdown. 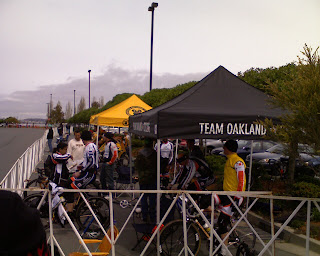 Great work everyone, it's a lot of fun hanging around everyone and that's why I'm on this team.

Sean Smith brought his "bike" - a mind-boggling collection of busted tubes at this point. If you were ever wondering what it would take to knock Sean over, here's a little example of the force necessary. Sean queued up for his first race back just to see what it was like and hung in quite a while given both his knees are gimped. 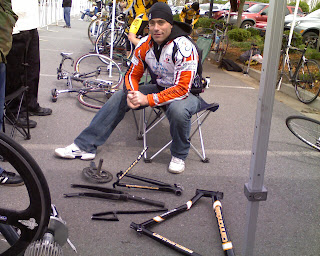 (Sean mentions that yes, the crankarm was bent, and no, he didn't bend any of these, he just took the cables out, and it fell apart like this - you gotta admit, that's nuts)

Finally, I didn't feel like I had the confidence to go with a breakaway today though looking at the numbers later maybe I should have. Solo and pair groups were winning all day so the odds were good but I just watched a Greg Gomez from Webcor roll away on a counter and didn't lift a finger. He stuck it for 20 minutes (or more?) so good for him - he earned the victory for sure.

I had a plan though, which was to come out of the hairpin second or third wheel and jump around the last corner first and sprint to hold it. I waited a bit too long on that last corner bit, and only got up to second wheel (just past Daniel Lam - upgrading after this weekend, congrats) but just couldn't quite make it to the front.

I did hold on against someone charging up from behind though and managed 3rd. My best finish since Suisun way back last August. Very encouraging after 8 weeks of total inconsistency this winter and only 4 weeks of solid training again. The "gulp" part comes in though as I realize that rather than get 3 cat 2 upgrade points, it looks like you get 4 for 3rd place. Which means (now that I fixed my cat 2 tally, thanks Russ and Greg for razzing me) I officially have enough points to upgrade.

So right about now I can almost *hear* Joel Robertson typing up a comment telling me to upgrade already (go ahead man, let me have it). I'll say I'm pre-registered for the cat 3 field in Madera, and I intend to race that. I may race Martinez as a 3 next weekend. After that, it's up in the air. I don't intend to sandbag - I've met almost all my goals in the 3s and could go. But I do want to make sure I won't just blow out of every race. Now that the legs are coming back from the travel and illness this winter, I'm more excited about moving up. I do hope I get to race with Toby or Maury once or twice though if they can get the points together. Anyway, soon enough.

You didn't mention you had enough points to upgrade today! Congrats!