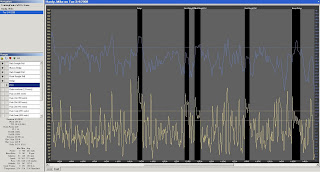 Turns out someone (Maury) actually reads this thing, and he admitted to an unsavory desire for updates, specifically those including Wattage information.

Well, who can blame him? I can't get enough wattage information either.

So here's a chart of last night's POO ride, just for you Maury

I highlighted the things that interested me - specifically the largest steady efforts of the night, usually when I was hitting the wind. Many people don't realize the difference in power required to ride in the group or to pull the group - this shows it pretty clearly.

The two yellow lines are placed at where my threshold is right now (260W or so - it's moving up as I get more fit) and where I can hold power for around 4 minutes (320W or so). The blue line is just at 30mph because it's a big round number. You can see average/min/max stats for the whole night in the bottom left (34.1mph max! and there was no sprint...)

You can see that it takes almost twice the energy to pull at POO speed as it does to sit in the pack. So even if it was really fast, if you weren't pulling, telling the people who were that it was easy and you felt good doesn't mean anything to them. Take a pull then pipe up :-)

You can also see that the an attack (or bridging to one) stings a ton. There was one point where a big split opened up, and I pulled for a straight minute at a 30mph average into the headwind to bridge the gap. I don't recall that ever happening in cat 3 crit, but maybe that's just me. Fantastic interval though!

And for Maury, you can see at the very end when he towed me along as he bridged across a huge gap it took a solid minute and a half at 30mph before we closed it. Since I was drafting it only took 260W on my part to sit on his wheel (instead of 300W to pull), but remember my threshold is only 260W? My legs were on simmer just holding on.

That's why the POO is the great workout it is though. In the pack you can recover, but when you hit the wind you get good Anaerobic Threshold and VO2max intervals.

Now if only we could get folks to pedal through all the corners and ride a good corner line (instead of arbitrarily peeling off...) we'd be all set ;-)

One final tidbit - cyclingpeaks.com occasionally posts Pro power charts. They just posted one and I noticed that the Pro (Bert Roesems) who has a threshold of 350W rides around at 160-170W pretty consistently. This is for a 4 hour ride. When they ride slow, they do ride very slow. When he did intervals on that ride he was doing ~500W though. When it's hard, it's very hard. Something to remember, and I'll probably be going slower on average after thinking about it.

I read it too, I just don't understand it.

Translation: there's not enough money for house renovations because I spent it all on cycling power gadgets and speed measurement devices ;-)

I start to read it but get lost in the numbers I must confess.

You're supposed to read it before the beer, not after ;-)