Isn't this a cycling blog? Where's the damned cycling?

The missus and I had a blowout 40th birthday party / Cinco de Mayo festival at our house last night (complete with bartendress and a banquet of made-to-order food, sweet!), so that's a large part of the story.

I also up and went to Texas a couple weekends ago which knocked a few days out of the schedule and took out a race weekend.

Believe it or not I do things other than ride (like, you know, running a small consulting business with my wife, and helping run a medium-sized one with a bunch of other friends) so missing a few days meant the following weekend after that was almost completely spent on catching up 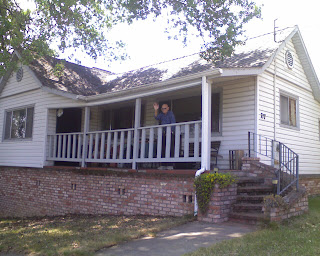 Then last week, during the week, we took off for the North Bay to spend a couple days with Teresa's dad (pictured above) who is dealing with some serious health issues and just needs a hand. Lots of driving and gutter cleaning and lawn mowing and stuff later, we dropped back in to town to play catch up furiously for a couple days before afore-mentioned birthday bash

So it's been a few weeks of Real Life Stuff but not much cycling and definitely no racing, and that's okay. I always manage to take the early part of the summer off from racing for some reason or another and I think it makes me better in August. This year looks like it's no different

I do miss the weekly Tuesday World Championships down at the POO, and hanging with everyone at Los Cantaros though - hopefully I get back in the groove and make it out next week.

Until then I hope everyone else is having a good time and tearing the racing circuit up. Speaking of which - I have to give a quick shout to Maury (upgraded!), Mel and Kieran (Cat's Hill podium folks) for their recent success. Also a quick shout to Alice to get better quickly. I'll see everyone out there soon enough.

You guys served up great food, a friendly bartender with great drinks. Great party! Thanks for the invite.

Just to be sure to tie this comment to cycling though: John got 14th at BHRR. Sounds like English won it!

You're welcome, glad you and Terry could make it.

That's great for John, and Nate's pro next year or I'll shave my legs. Seriously

I can't take credit for cooking the food - just ordering it, but I was happy to see you with a huge plate, Joel. I'd love to have you and your gorgeous wife over some other time for something we cooked up ourselves. I'll try to make enough for your biker's appetite.

Oh, and Nate better be pro because Michael is NOT shaving his legs if I can help it.

I think it was Sean with the huge plate of food. Don't mix us up...

Thoese pork tamales were great. What's the name of the place that did that? In case I want to have something catered....

http://www.tamalegirl.com/ is their online home

If I had it to do over again, I'd still do the taco stuff (they didn't recommend it, but a ton of it got eaten), and I'd keep the tamales at the same number (we had 4 pans of them - a lot!). The only thing I'd change is maybe less chips and salsa

Anyway, they were really helpful - so much so that I yelp'd them: http://www.yelp.com/biz/la-borinquena-mex-icatessen-and-specialty-shop-oakland#hrid:d5pcn0RRwvaK3qdGMnOMVw