Back in lovely Modesto for the second day in a row this Sunday. Yesterday was a crit, and today is actually in Salida, CA, but it's near Modesto so they call it the Modesto crit. Did you know Modesto is only 1.5 hours from Oakland? Salida is only 1.25 hours from Oakland. They're not that far away, but they are a world apart, for sure.

It was 60 degrees in Oakland when I woke up but after Sean, Jeff Sobul, Brian Johnston, Ed Lai and I got to Modesto at 7am, I was feeling pretty stupid in my hoodie since it was already 80 degrees. Only got up to 100 though, not so bad, right? Neutral water feeds helped a lot - it really wasn't that bad. We were all wondering in the car how the VeloPromo B team (Cicarreli Enterprises) can set up a great neutral water station, but (for instance) the Berkeley Hills RR can't. Makes no sense. 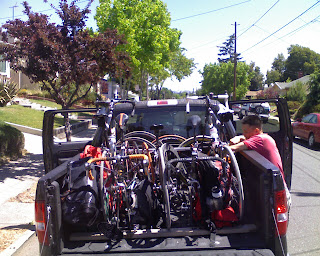 Anyway, the ride up was good - the truck was packed in tight with 5 guys but everything fit

The race itself was not what I was expecting. Breakaways simply didn't work today because Daniel Holloway had a different workout in his I'm-a-national-champion schedule than we did, and he needed to ride really hard for a long time apparently, because he just sat on the front and towed everything back. Damned impressive really but it meant that my attempts to be more aggressive today (4 different breakaways!) were all for naught.

At least I learned the lesson from yesterday, go with the breaks! It was a lot more fun, and one of them could have made it - if it had I would have been there...

Coming into the sprint, we just caught the cat 4 field, and boy was that a mess. We somehow kept everything together, and though I had been on uber-sprinter John Wilk's wheel I lost it into the last corner. Then while I also mostly learned the sprinting lesson from yesterday and I sprinted much more aggressively I didn't quite unleash the best sprint at the right time, rolling across in 7th place out of the 28 folks that started. But you know what 7th place is? My first cat 1 upgrade point, in my first weekend! Score. 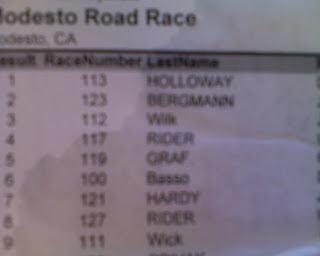 Not sure what I can take away from this race (besides the upgrade point) except that in the sprint I need to really push harder and earlier. The numbers weren't as big as I can go - 700W instead of 1000W (big difference!) and the duration was a bit shorter than I can do when I'm mentally on my game too. If I really get all that right, I think I can crack top 5.

At the risk of alienating one of my 4 readers, I'll pick on Joel again and mention he was not in the top 7 ;-). John W (his teammate) was 3rd though (great showing!) and Joel worked for him, so it's only good for laughs. Honestly it was a great weekend - I really enjoyed racing with the stronger field, and I was off in a couple breaks with Joel (who was both supportive and ribbing me at the same time) which was honestly a lot of fun. Then sprinting with John was great too. I ride with these guys every week but never get to see them turn the pedals in anger - now I do and it's great to watch.

Also, it was fun to do 71 miles in 2 hours and 40 minutes, and finally, frankly, it felt great to race in a new field and just not do anything stupid or dangerous despite the higher speeds. Safe and smooth is good, and being safe and smooth while being aggressive and mixing it up in the sprint is a bonus. Good stuff.

Not sure what's up with the Memorial Day weekend, I've got a great friend coming in to town so I may be MIA. But I'll be out at the port. See everyone there.
Posted by Mike Hardy at 3:06 PM

guess all that sand-bagging really paid off! ok, maybe it's your early morning commute riding... but anyway, great job kicking ass out there in the heat. "Cat 1 here you come!"

Nice job in 'The Furnace' this weekend mate. Keep dishin' out the lessons (for my sake) and rackin' up the points. Hasta mañana.

Thanks a lot both Morgan and Haydn

I just emailed back and forth with Justin (who had talked with some other folks that did the race) which confirmed my suspicion that these races were just waaayy too different (easy) from most of the races on the calendar to think I'm just going to pop into Mt Hamilton (to pick an absurd example) and get a 5th or something, but I'll take the confidence boost nonetheless :-)

I think a confidence boost has got to be worth at least five or 10 watts, no???

This blog is dead to me.

That's it! Joel, finally have a good nickname for you - the godfather

Welcoming you to the races with open arms then quietly putting you on the "hate list" and sending the henchman after you ;-), policing the blogs etc

Congratulations, Mr. Hardy. I wouldn't expect anything less from you. ;-)