It's a bike party!

Went for the long ride this morning

GG Park to the Great Highway and the Lake Merced loop (thanks Beth!) then up Foerster/Teresita, across Twin Peaks, then bombing down 7th back at the park

Then .... skidding to a stop at 7th and something because hey! It's Bike to Work day! Woohoo - there's maybe 20 people clustered around a table with free bagels, coffee, water, bags, and scones. 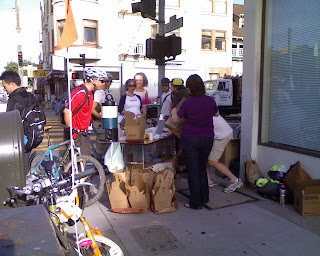 Cyclists are whizzing around everywhere on their way to work, dropping in like hummingbirds for vittles. I'm a scone-a-holic so I grabbed one of those.

Then I pedaled off through the park, headed out Arguello and out to the Presidio, bombed down towards Crissy Field and .... stopped short at a *huge* bike to work party in the Presidio. 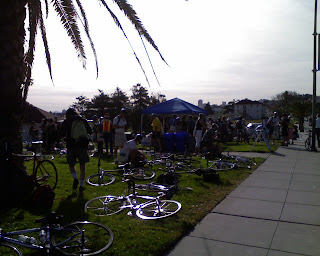 Maybe 50 folks and people are laying around taking it easier here - there's supposed to be a BBQ later, apparently but some of us do actually have to get to work at some point :-). So I grabbed an apple and waded out of the crowd back to the commute

Saw about double the bike traffic, all told - honestly I see quite a few bikes normally, so this meant that at any given point there were about 5-10 people on bikes cycling to work. That's a lot of people! A good showing

And all that hippie treehugger crap aside (because it's all about me, really) how cool is it when you're normal commute to work all the sudden has *feed zones*?? Very cool.

Apparently I get a free ride on the ferry tonight, and maybe another canvas tote bag. I have been warned that it is mayhem trying to get all the bikes *on* the ferry though with all the extra riders. We'll see :-)

At my office we had Gil, Dennis, Jon Belew (plus his daughter to school!), Nick and me. Go Tacit Knowledge

Hope everyone else riding around today has a good ride

I know! There were 15-20 people on the Dumbarton this morning, plus the 'feed zone' on the west end. Very nice. I asked if they will be out there every day.

Too bad tho that by tomorrow all will back to normal. Those people never give up their cars for more than the day.

Yeah - I heard that Bike To Work Day is sort of the equivalent of going to church on Easter or Christmas.

At least their heart's in the right place, and I have seen a steady increase in folks around me at least. Brian Johnston commutes a lot now, I never used to and here I am full-time. A couple of the people in my office are regulars too.

I'll just continue spreading the word in a low key manner and helping other people that show interest figure out how to actually make it work for their situation to do my part.

You got me commuting Joel, so I think you've got +1 karma there already ;-)

If nothing else, hopefully, it will give people who've never biked to work before a pleasant experience (can't beat this weather today) that they'll remember when considering whether to do it in the future. And I'm sure there will be one or two converts and that's one or two less cars!

Too bad you guys don't get special "I bike to work every day" V.I.P. seating on the ferry, today. Seems like you should.

well, being a practical man, a free ferry ride is $5, and I'm ok with that

they can keep the seating ;-)