First real ride with the Pros

I say that because the two Modesto races I did, while they were fun, apparently weren't typical of a real race because there weren't enough strong folks there.

Even though today's flat four-corner office park crit (typical) was a P/1/2/3 field, so we had a ton of cat 3 riders in there, there were also some domestic pros (Roman Kilun from HealthNet and Kevin Klein from Rock&Republic Racing) as well as many other strong characters from the local scene including the ever-present wrecking crew of Joel Robertson and Brian Bosch from SPOC as well as lots of stoners and strawberries (BPG and CalGiant). And the field was full, with 120 (!) people ripping around the course.

I'll admit, when it started, I was a little worried - within 5 minutes there was a lot of pressure at the front, and for the next 10 minutes it was on. You can see in the chart how spiky the power demand was fighting for position in such a big field, and how far over my threshold heart rate it took me, but I was unwilling to get too far from the front as I thought a big break might go or a pack split might happened, and I didn't want to miss it like I did at Modesto.

All for naught though - the wind was pretty vicious, and the pack wasn't willing to let anything go, so I concentrated on saving the rest of my bullets for the sprint.

And oh, what a sprint. I learned something today (which I've already told several people, but it is still a revelation to me). In the P/1/2 races it's not "a" sprint. There are multiple sprints. Now, in the cat 3 races, there's sort of a last lap surge where you need to be in the top 5 or so, then everyone sprints. But there aren't that many people that can legitimately sprint or even last in that surge, so it isn't that big a deal.

In the P/1/2 though, there's a big surge around the last lap just to get anywhere near the front, then you have to deal with people literally pushing you hard to get you out of their way and bumping you, and then - if you're lucky and you've made it that far with good position - you have earned the right to have a big sprint way too early, something like 600 meters to go, where the sprinters are merely separating themselves from the rest of the pack as the last of the lead-out men are doing their job. Now! Now, is where the action happens - if you are still in the draft bubble up with the lead group, you've got the chance for one last burst of speed, and if you can accelerate enough you'll hit the line with a good placing, or maybe a win.

Not sure why, but I didn't think it through before, and didn't realize the last part of the lead-out was so strong that it was basically a full sprint. So when some (not all) of the sprinters stood up and jumped with 600 meters to go I thought they were crazy, and I did not go. My mistake. I came in 15th out of 120, but next time, I'm going to give that first sprint most of what I've got and even if I don't have a great burst after that I bet I do better. We'll see.

So there you go, P12 sprint tactics in a nutshell.

I'll take a moment to give Joel Robertson some credit here. I've been razzing him here and in person about how I've beat him twice, but he crushed me today *after* doing a leadout for Bosch (who got second by a whisker). And the times I've beat him he was working for teammates too. At any rate, he followed that performance up with a race-long break in the 35+ 123, and I gotta say, I can fight for position with the front of the group, and I can sprint, but I certainly don't have that power. All I've got is heckling, man, I can't help it ;-)

Other random thoughts. Does anyone else feel like a big ol' fred when they're riding next to either a domestic pro or someone they know is super-fast? It can't just be me. I see the Rock&Republic kit rolling around next to me and I think "better not squirrel out now Mr Wizard, don't want to crash out a guy that's actually good at this". I even skeezed a bit with Bosch next to me. Joel'd do it but I ride with him too much. Yeah, I should probably get over that. But I thought I'd own up to it. 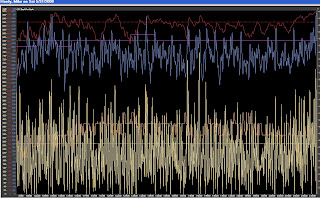 Anyway, here's the chart. Geek away. And the result sheet, because, well because I took the picture and what else am I going to do with it? Almost beat Roman! Could've bagged me a pro if I had known about that multi-sprint deal. Next time! 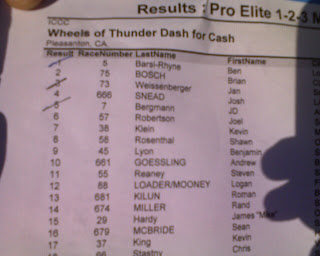 Oh, final thought - MechaAlice (Alice-or?) was on her trainer "glowing" away, while cheering for Brian in the crit. She gets the "Mecha" tag because she had an articulated full arm brace and her elbow was still all swole up and green from surgery after her crit crash a few weeks back. That's core. Keep getting better, and we'll see you at the port, Alice.

Alright, enough blah blah. It was great seeing everyone out there today. Rubber side down...
Posted by Mike Hardy at 8:14 PM

Yeah, it was a funny race to be sure. I have to give cred to my teammate Eric who, with around 3 laps to go towed me to the front where I was able to stay til the end.

Truthtelling: I never gave Brian a leadout! I was sitting second wheel the whole last lap: first on Tore's (Webcor) then Keith Miller's (CalGiant). We were on the left approaching last turn, but the winning train, with Brian in it, came up the right. I sort of jumped over to it after the turn.

Roman was leading it into the turn I think, but then sort of sat up with 200 yrds to go, almost taking Bosch and couple of others out.

Don't be afraid of those guys! You'll beat them soon enough. Not sure if KKlein is officially a pro, though he seems to race full time. Where does that leave him?

Really good work out there by the way. 15th in that huge field and lots of strong characters? 3rd race? Pretty cool....