One goal met, but some missed opportunities

Went to the Modesto crit and played with the big dogs in my first P12 race today.

Carpooled up with Tim Granshaw, TOSean and Joel. Fun chatter up and back, with a free anatomy lesson. Good times. 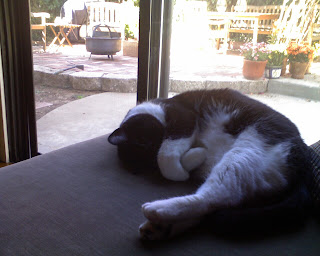 Modesto itself was only 95 degrees or something for the warm up and race. Don't get me wrong, that's hot (hot enough to melt my cat, as you can see), but it's not apocalyptic.

Mixed up a bit at the start, jumping across gaps, rotating a bit, but it was a bit too early and by the time the heavy hitters went for it I was taking a breather. We'd been doing 6 minutes at 28-29mph by that point and 10 over 27.5. Similar to the heat - not lightning fast but moving along. So I'm resting up 15th wheel or so and there go the stars-n-stripes of Hollaway up the road with a bunch of folks.

That meant I watched the break that stuck roll away - a little disappointing since I was in position and honestly had the gas but thought "it's a long race, that's a messy number of people, I'll fire it up in a couple more minutes". Lesson learned there. If you can get in a move, just do it already.

In the final sprint I had an opportunity to help Chris Turner (a nice guy, you'd help him too) for the win after he lapped but I had a cranio-rectal inversion and didn't realize he had a lap. Would have been nice to exercise some power (which I had - legs felt great) in the finale with Bosch there too. Another lesson learned. Pay attention to who is off the front, and chat more with folks you know instead of playing the hermit. Even though I don't have teammates, that'll make the racing more fun. At least I let Chris in the slipstream with no fuss when he asked.

At the same time, next time ask for a hand though, Chris! I had about 600-800m of warp speed in the tank, and with me and Bosch, you might have beaten the super-strong Rapinski and scored one for us underdogs...instead there was a lull and he attacked solo on the last lap, then got pipped.

Finally, in the real sprint I hesitated at my pre-determined sprint jump point (Suisun Crit repeat here...), stood up with the rest of the group, and didn't do as well in the pack sprint as I should have. Was still accelerating at the line which is always the sign of a bad sprint for me. Had a clear line and everything but something along the lines of a starstruck "wow I'm in a P12 sprint" was going through my mind instead of "go go go". Dang! Final lesson learned - they're just bike racers, and so am I. Jump already fer cryin' out loud ;-). 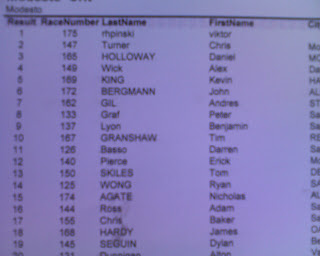 I'm not mad at myself though. My clearly stated goal at the start of the race was to finish with the pack or better. I got a 18th (out of 40ish?), I don't think I rode sketchy or lacked class, and hopefully folks in the group will start to get used to a hairy legged guy with carrot choppers (tri-spokes) in the group. Which would be good, because I'm going to remember these lessons, and I intend to be mixing it up in here for the rest of the season...

Oh, I should mention (to steal a Paul Mach line) that you can see here that I beat both Joel R and Brian Bosch, conclusively proving that I am better at all things bike-related than them. Guess they're just handing out cat 1 licenses to anybody nowadays, sheesh ;-) 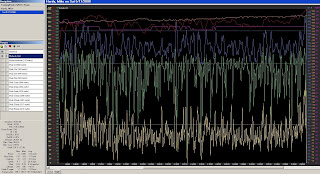 You can see in the chart what the numbers look like. I put gridlines in at my LT power (270W currently), 30mph and 100rpm. And I smoothed it a bit so you're missing the peaks but you can see better. The heat made my heart rate skew pretty high - probably 5-10 beats. Otherwise that's normal for me.

Now I'll take a quick moment to say thanks to everyone that I chat with or ride with or that reads these bloggin's and encourages me in general and specifically when I moved up to the 2s. I love pushing myself but it isn't always easy - your support helps a lot.

Next up, the Modesto RR tomorrow. 72 miles of flat hot fun, weee...