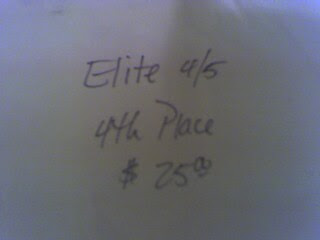 So, last year, I did this bike racing thing reasonably seriously, but I
just wasn't getting the results I wanted. I saw a couple guys that I
raced with quickly start kicking ass and move up into the category above
mine, and I saw myself dropped repeatedly (as in, at 6 different races)
on on a hill when a good deal of the pack was moving along together, up
and over. That gets pretty old.

The combination of those two things is important though - it showed me
something I knew already but had to relearn: hard work pays off. I know
it sounds silly, but those guys trained a lot, and they got results.

So this winter I trained a lot. And I mean, really, a lot. I was doing
15 hours a week on the bike on average for nearly 3 months, and there
was some intensity in there as well. I can ride a hundred miles in a day
on 5 clif bars and 3 bottles of water, no sweat. Two days in a row.

Why would anyone want to do that? I mean, that's a lot of training - too
much for someone in my category (4) even. But here's the thing - you'll
laugh if you know me - once I realized hard work would pay off I thought
to myself, well, given an arbitrary amount of hard work what's the best
I could hope for?

All that you have to do is train waaaay more than other people. So I've
given that a shot.

The funny thing is that bike racers are almost superstitious about
wanting to win a race. They'll all say that they want to do well, or
that they want to be in the top 5 or something, but they'll almost never
say "I want to win", much less "I want to win race XYZ". Usually because
it's nearly impossible to actually win a bike race, and it's not always
in your control anyway.

But I still want to win a race.

So, which race? Well, I'll have family at the Cherry Pie crit in Napa,
why not that one? I mean, that's as good a reason as any to pick a race.

So that's my goal. And if it doesn't happen there, then I'll have to
pick another one, but I'm still going to win a race (dammit!)

So far this year I have actually won a "race" (it was a training race,
so I can't take the quotes off, sorry), I was crashed out of the first
real race (not my fault), and now I've gotten 4th place at the second
race of the year. Cherry Pie is the next race. Maybe it's time?

In the meantime, check the prize for 4th place at the Martinez crit
today. I guess I can't quit my day job yet