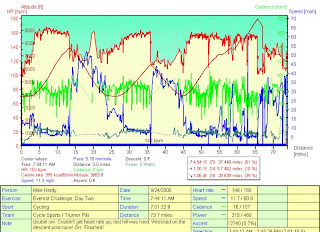 Wow. One day of the Everest Challenge is pretty hard, but today was an
enormous battle just to finish. It is amazing how many little
semi-motivational mind games you can think up to play on yourself given
around 6 hours of effort.

The last mountain pass today - into an "Ancient Bristlecone Forest" -
was just tremendously difficult. Nearly all of the other climbs were a
pretty steady effort - a smooth grade. The last climb today was
incredibly lumpy. What that means is that when they say the last few
miles are an average 10-12%, which I had an appropriate gear for, the
climb is actually bouncing between 5-6% (not so bad) and 15-20%. At the
end of two days like this, I just didn't have the gears for that. It was
really a struggle.

The main thing that kept me going was that every once in a while I would
pass one of the non-racer's doing this ride (there is a "public /
touring" category), and these guys and gals were just really suffering.
But to a person, you could tell they were going to make it. They were
determined. And if they could do it, I could do it, so on I went.

Interestingly, this was my last bike race of the year, and they stopped
the clock at the top of the mountain. So I'm done bike racing for the
year, and would you believe I made it through the whole season without a
crash?

So naturally, I'm roaring down this last mountain, happy I made it and
looking forward to getting back to the car when I come flying around a
corner and have a huuuge rear wheel slide. If you guys have seen
dirt-track motorcycles, it looked like that. Very "exciting". I manage
to save it (whew!) and look back at the rear tire - sure enough it's flat.

So I'm on the side of the road, changing the tire, still bundled up for
the 40 degree temperatures at the top, but now I'm down where it's 80.
So I take off my two jackets, finish changing the tire and get going
again. Only problem is, it's roasting hot now, and I have nowhere to put
one of my jackets. Like an idiot, I just tie it around my waist and
point down the hill again.

Sure enough, just a couple miles later, one of the sleeves on the jacket
tied around my waist gets pulled into the rear wheel, jams up between
the brake and the wheel and locks the rear wheel up completely while I'm
doing around 35-40mph. Luckily the road is reasonably straight where I
was, so I had a chance to scrub most of my speed before the road curved.
The rear tire and tube shredded and exploded, the road eventually curved
away and I pitched into the gravel for a nice 5mph crash+roll.

Well, that was really exciting. This is clearly not my descent! The
first race support that came by didn't have room to give me a ride, but
they did have spare wheels, so I handed them the troublesome jacket,
took a spare wheel, and finished the damn ride

Total stats ended with me being on the bike around 16 hours. By far the
most I've ever ridden in two days, since I usually average around 8
hours a week. I'm writing this the morning after, and from this
distance, I'll answer the question in my last post by saying it was
worth it. I'll probably do it again next year, though only time will tell.