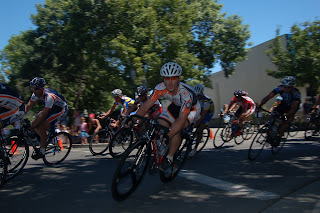 So I've already mentioned that my goals are a top-10, then a top-5, and
to be winning the break at least once, while helping teammates whenever
possible. My chance to do that today took place in Vacaville, at the
Vacaville Grand Prix, a technical, slightly hilly, really well done and
fun figure-eight course in the much nicer than expected downtown of
Vacaville, California, less than hour from my house.

I get a great spot on the start/finish straight and get set up. I've
been building up a new race bike and I was hoping I could get ready to
race it today which is why I had two bikes, but I had some technical
difficulties and just couldn't get the new bike working right. So I set
up my old trusty bike for the race and warmup while watching my teammate
Paul work his way through an early Sunday morning in his Masters 35+
category 4 field.

I've got one teammate in my race, John Wilk, and while I tell him I
can't commit to anything I'll do whatever I can.

Our field hits the course, and decide having my legs torn off yesterday,
today I feel great. It was one of those days where the course didn't
feel hard, the corners were interesting but easy, and the hill was
something for other people to worry about. Don't get me wrong, I wasn't
the strongest guy or anything, but I was feeling okay. This was going to
work out.

John meanwhile is taking my feel-good race and making it look silly,
working up front, in a breakaway, just really tearing it up. All to no
avail though, it's coming down to a bunch sprint and here's where I made
a major break from the last two races I've done with cat 3s. I fought
tooth and nail for my position in the last few laps instead of letting
these more aggressive guys take it to me.

The entire last lap I can't find John though, and when we hit the hill
I'm still looking around and getting closer and closer to the front. As
I'm just about at the top of the hill, I hear him behind me saying
nothing more than "I'm here". Excellent! When you're the leadout guy,
and you hear that, it's music to your ears. I don't know what I can do,
but I turn around and say "let's go" and thread through to the outside
on the downhill assuming he'll do the needful.

We hit the last corner and I'm about 6 people back, blasting into the
headwind, on the windy side, just soaking it up. There's a little kink
with about 150 meters left before the finish, and about 100 meters
before that I make the only move I can. I accelerate approximately 1mph
for the lamest sprint in the century , advancing from about 6th to about
3rd with John on my wheel. He wisely sees I'm not going too far and
lights it up, blasting completely off the front of the field through the
kink to take the win. I meanwhile huddle into the beloved precious draft
of the other sprinters and just hang on for dear life to take ninth.

So that's it. I got a top 10 and in a small way, I think I helped John
get a clear lane and an acceleration point for his win. I tell you what
though, after Leesville Gap and this race it's clear to me what the
difference between being first over the climbs (John) and winning races
(John!) is and what I'm doing. And I'm not doing badly, but I've got
some training to do...Great day for Team Oakland though.

We'll see what I can do before Coyote Creek. I think it's next on tap.