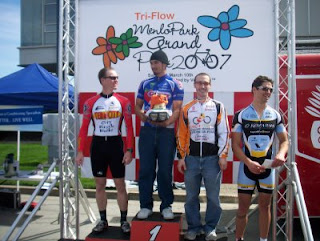 Enough of these challenging scenic road races, you know you've got a
guilty craving for some flat four-corner crit action, right?

Well, here's the Menlo Park GP. It's a flat rectangle, maybe 1k in
length. You can pedal through all the corners (not that the E4 pack did
mind you, nope, we hit the brakes and coast because ooooo a corner) and
the short straightaways were long enough that you couldn't do the
low-energy attack-before-the-corner-and-gap-the-pack thing.

In other words, it rode like a real honest-to-god flat square.

Who's the cast? We had Anthony Eng, Andrew Hardardt, Stephen Langone,
Ian Swinson (in his first E4 race, congratulations) and myself.
Beautiful weather, nice temperatures.

I checked registration the night before and noticed that all the usual
hammers were going to show up, but with no wind in the morning, as I was
doing the warm up, I boldly
predicted that there wouldn't be anything going on all race and we'd
have a big sprint.

One thing we 4s have done well this year is getting to races with a lot
of time and warming up together. With the exception of Ian (who did drop
by at the end of the warmup to sync up) we all had the trainers together
for a quick (but adequate, I thought?) warmup while we were able to chat
with each other. Very useful.

I'm still looking for a #1 next to my name before I become cat 3 cannon
fodder, and I worked on my sprint earlier this year. I asked around and
no one else wanted anything in particular, so with no one else wanting
to do anything at the race I wanted to go for it.

I predicted a sprint, and for me to do a sprint well, I need to have
breaks neutralized, and be confident that I can sit in but not get
swarmed in the last two laps, so what I needed was covering during the
race and what I call "pack discipline" at the end. The whole pack had
the covering thing down for us during the race, so that only left the
last couple laps.

Ian had fought his way up to the front near the end, and I was on his
tail, maybe 8th or 10th wheel, with the pack two-wide and two laps to
go. Perfect, looking good at this point. It was too early to do much,
but on the long straightaways swarms kept threatening. Ian and I
line-hopped over into the swarming folks and maintained our positions
pretty deftly heading into the last start/finish straight. At that point
in a race the pack always seems to hesitate a little bit, and true to
form the speed dropped a little with a big swarm threatening our perfect
positions. I yelled at Ian to punch it, and he rolled up and hit the
wind from about 1k to 700 meters to go - stringing it out in the
process, with the impending swarm fading back - sorry, next time guys. I
was still around 7th wheel, and that left the guys in front of me
without many options - perfect for me.

They basically had to hit the gas at that point, so I was able to sit in
the rest of the backstretch, and was fourth wheel coming around the last
corner. With 300m to go everyone stood up and gave it what they had - I
was still fourth at that point, but one of the guys in front of me was
fading and that was motivating. I just inched him out at the line,
taking third in the process.

I ran through the numbers later (below if you're curious) and while I
wish I had more power, I hit my sprint-training numbers at the end of
the race, so I must have done something right with regard to getting to
the finish in good shape, at the same time that I either need to time
things better or just need more raw power. The winner was still going
away from me at the line, so I'm going to vote for more power. Hopefully
he'll either cat up or I'll be able to train my power up in the next few
weeks and get the elusive 2nd or 1st place I haven't cracked yet.

Other exciting bits: Another Squadra dude crashed right in front me, but
this time I had a few more meters to dodge him, and I did so
successfully. Not so lucky was some guy between the crashee and I, he
hit him front wheel first and did a full front flip. For a moment I was
racing next to an upside down bike about 8 feet off the ground. They
neutralized us for 10 minutes, then stopped us and restarted us with 3
laps to go though, so they could mop up the broken collarbone one guy
had, and the broken tibia/fibula another guy had (ouch).