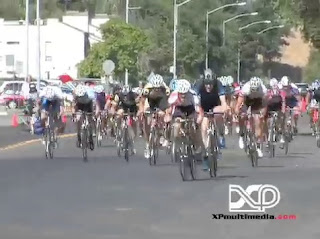 So for all the readers following along at home, it's important to
remember that I had a few goals this year as a Cat 4. I wanted to win a
race. I wanted to help organize my fellow cat 4 teammates, and help
others do well. That's pretty much it.

For those that have followed everything, you'll remember that I did win
a race in January. Oh wait! It was a training race. Damn, felt good but
wasn't really satisfying. I didn't feel like I had met the goal. Then, I
entered a race where category 3 racers (one level up from me) raced with
us, but the results were collated into separate category 3 and category
4 ranks. Turns out I was 13th in the race, but I was the first cat 4
racer! I won! Sort of! Totally unsatisfying.

I've done consistently very well though, all season, well enough in fact
that I was in serious danger of being forced through slow accumulation
of upgrade points to move to category 3 without outright winning a race.
Sounds like a good problem to have, but still, I don't like unmet goals.

So I plotted to go to Texas, thinking the fields would be a bit
shallower there, and that didn't quite work out either. So after my
ill-fated (and chock full o' hubris) trip to Austin thinking I would
bring home the first place goods, I was really down to one last weekend.

This weekend I was either going to win a race or accumulate enough
points trying that I would get moved to category 3.

So it's off to the Pacific State Grand Prix in sunny Stockton, CA for a
Saturday race. The Burlingame criterium, run on Sunday gets all the
press, but if you ask me the PacState GP had an equivalent course if a
little safer, a larger and all-cash prize list, and the weather is much
better. A good race.

I got there pretty early, toting everything necessary to live there for
a week basically, since I had the Team Oakland pop-up tent, and watched
the two races before me. Interestingly enough, they both ended up in
sprint finishes, and the first person around the last corner won the
sprint. I looked at the corner and the start/finish line. Tailwind down
the straight...around 150 meters to the line from the corner. Note to
self, breakaways probably don't work, and make sure I'm first around the
corner...

So the field is off for 50 minutes of sun-drenched, L-shaped anaerobic
fun, and while there was a little breakaway action, sure enough, there's
just a couple laps to go and we're all together. At this point, I'm
tempted to shut my brain off and go into "duh...I'm bike racing" mode,
which happens worryingly often enough but I catch myself tuning out and
actually say (using my inside voice) "I am relaxed, and I am in control
of this race". Sounds silly, but you should try it. That ends my reverie
and with two laps to go I review my plan as I pass certain
markers...."change gears here, position body there, jump here, take this
line, this gear here, full gas to the line from this spot..." etc.

Following that, the last lap felt like I was holding a royal flush and
just dropping one card at a time when it was time to lay it on the
table. Someone jumped hard on the back straight, and while everyone else
was thinking "too soon" I was thinking "600 to go and a free lead out!
sweet!", I jumped off their wheel with 250 to go, blasted past them into
the last corner with maybe 5 feet on the person on my wheel and
proceeded to keep pounding the pedals and adding gears until I sailed
across the line with...about 5 feet on the person on my wheel.

I can't begin to tell you what a relief it was when I realized that I
had finally completely exorcized that goal and could mentally move on.
I'd gotten on the top step of the podium at last!

After basking in that relief for a half hour or so, I then realized that
I was going to be a category 3 for real, and hopped on the trainer to
cruise for a few hours, through the Pro race where they were duking it
out for $10,000. Made the $60 I won look like chicken-feed, but it was
priceless to me.

What's next? Well, I'm pre-registered for the Burlingame Criterium on
Sunday as a 4, so we'll see what I can do to help my teammates since I'm
about to check out...