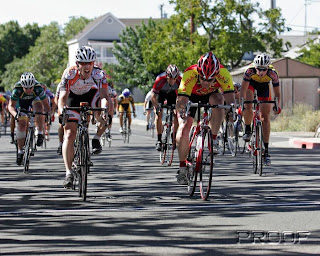 Suisun is one of my favorite races. It seems silly because the course is
completely featureless. It is a "typical" 4-corner rectangular course
like most other criterium courses, but what makes it different is that
it is really really short. I mean, it's only a half-mile around. That
makes for some very interesting racing because you can lap the field
with a 50-second lead, or you can sprint almost the whole lap.

I haven't been having good luck with flat tires lately and need a little
confidence, so my plan at Suisun was basically to stay up front, then
sprint.

That doesn't make for interesting reporting, so I'll cut to the chase
and say that I scoped out the sprint before hand, and decided that the
appropriate thing to do was exactly what I did at the Timpani Criterium
where I won. I would accelerate very hard into the last corner,
hopefully get a gap so the person behind me didn't have any draft, then
hold the sprint all the way down the start finish straight.

Unfortunately, when I got to the point where I was supposed to jump
something unexplained happened in my head. Instead of actually
accelerating I literally thought to myself "I should accelerate here"
instead of actually doing it. Well, that's not useful . About a second
later the message finally got to my legs and I accelerated a little bit,
but it was too late. The corner was right there so I had to stop
pedaling, and while I was in the lead I didn't have a gap.

We came around the corner and I gave it everything I had, but the guy
that was behind me was juuuust able to come around me and nip me at the
line.

So, I got second place, which is fantastic, but I also learned that I
need to remember to do formal visualization before the sprint or I'll
miss the mark. I normally do that, but this time I didn't and I missed
an opportunity. Hopefully I won't make that mistake again, but obviously
time will tell