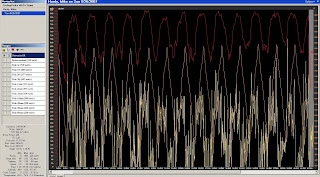 Getting closer to the end of the season but the races are still packed
together for the second to last weekend of the California Cup.

August 26th is one of the hardest races of the year - the much-feared
University Road Race. The race is on a loop of roads in the University
of Santa Cruz. If you've never been there, you should go, because it is
a very picturesque campus - little buildings all nestled in the mountains.

Wait, did you say mountains? Yep - great in cars, but on a bike? Well,
the course is a 3-mile loop, and it only does two things - it goes up,
and it goes down. Each lap goes up one road for a total elevation gain
of around 400 feet, then it turns a corner, and drops down those same
400 feet, where it turns a corner and you go up again.

My category 3 race had 15 laps of this scheduled, quite a party, with 60
of my closest friends.

I should mention that on the way down, I got a flat right rear tire on
my car. I changed it quickly, but is this a good omen?

On my team we had the rarely seen but very strong Michael Fee, and James
Bauer was also present. James and I had raced the day before, but Fee
hadn't raced in months. I've trained with him though and know he's very
strong, so I think we had a good squad there.

I've heard that you can't let any gaps go in this race - that you have
to stay at the front the whole time and just ride as hard as possible,
so that's my plan. Not much team tactics going on with a plan like that,
but the course itself was so hard that it was what would beat most of
the riders, not tactics.

Right before the gun went off, Mike Fee noticed his front wheel was
flat, so he got one of mine, but I don't think this is a good omen either...

True to the prediction of straight-up hard riding, when the pace picked
up in the middle of the race, the peleton detonated, and pretty soon we
were down to around 15 riders.

With 7 or 8 laps to go, I realized that James, one of my teammates, was
in the feed zone now making sure I had enough food and water. That was
extremely nice of him (and his wife did hand up some of my infamous
"Hardymax" (or "CytoMike" if you prefer)) but I was curious how he ended
up out of the race.

So I'm down to one teammate in the race, but I'm able to stay
consistently with the front of the pack, so I'm starting to think my
chances are pretty good in this race. That's an amazing realization for
me as I'm still pretty new to this higher category racing, and I'm never
sure how strong I am relative to the other guys.

With 3 or 4 laps to go, unbeknownst to me, a deer leaped into the pack
and took out a couple of riders, with Mike Fee among them, so his race
was over. This is definitely not a good omen.

Each of the last 3 laps, going up the hill me and three other riders
surged off the front and got a gap on the remaining pack, but we never
had a large enough gap at the top that we didn't regroup. When the final
uphill came, my legs were so tired I didn't have much of a sprint, so I
took 7th in the grinding uphill finish.

That's not bad, but after thinking about it a lot, I've come to the same
conclusion I came to after San Ardo - if you want a breakaway instead of
a sprint you have to give it everything you have when you have a gap. At
the top of the hill when we had those gaps I never really pushed it, and
that let the rest of the group back on. I could have gotten 4th instead
of 7th at least.

Lesson not quite learned last time, but maybe this time it will stick.

I will admit I was extremely happy with 7th though. On a course this
selective, in a new category, that was a great result.

Two more races in the CalCup - the Challenge Challenge which is supposed
to be ridiculously hilly, and the Giro di San Francisco. It looks like I
can climb okay so I may do well at the Challenge, and I know I can
sprint, so the Giro should be an opportunity as well.

Maybe by the end of the CalCup I'll have a reasonable standing in the
series, and I may even have enough points to be upgrade to category 2!

We'll see how it goes next weekend...